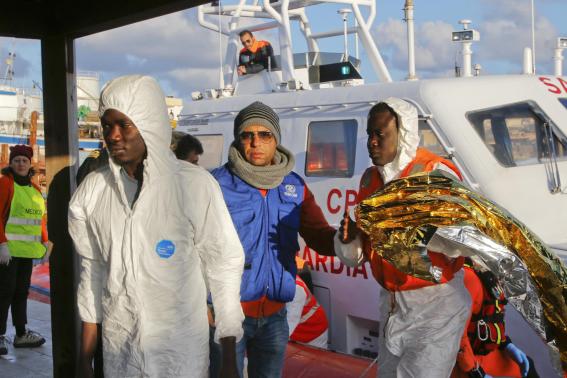 ROME (Reuters) - More than 300 people died attempting to cross the sea from Africa to Italy this week, the UN refugee agency said on Wednesday, adding pressure on Europe to expand a border operation that does not have a clear mandate to save lives. The high number of deaths, including 29 people who died of hypothermia on the deck of an Italian coast guard boat hours after being pulled from the water, has re-ignited criticism of Italy's decision last year to end a full-scale search and rescue mission. Among the latest incidents, an Italian tug boat rescued nine people, the only known survivors from two boats that sank, and brought them to the Italian island of Lampedusa on Wednesday. More than 200 people remain unaccounted for. Those two boats were part of a four-boat flotilla that left a beach near Libya's capital Tripoli on Saturday, said Carlotta Sami, spokeswoman for the United Nations High Commissioner for Refugees (UNHCR) in Italy. A third boat, carrying an estimated 100 migrants, is still missing, survivors said. A 12-year-old boy is among the missing, most of them young African men. The Italian coast guard picked up 105 people on Sunday from the fourth boat, 29 of whom subsequently died of cold while on deck on the journey to shore. "We know what fate we are going towards and the probability of dying ... But it is a sacrifice we consciously make to have a future," one survivor told International Organization for Migration (IOM) staff in Lampedusa. The survivors are from Ivory Coast, Senegal, Gambia, Niger, Mali and Mauritania, the IOM said. The UNHCR estimated the death toll of at least 300 over the last week on the basis of interviews with survivors. Libya is the primary departure point for migrants seeking to cross the Mediterranean to reach Europe. Many pay smugglers up to $2,000 to make the crossing. TRAGEDY AND CRIME "What's happening now is worse than a tragedy -- it is a crime -- one as bad as any I have seen in fifty years of service," IOM Director General William Lacy Swing said. "These smuggling networks act with virtual impunity and hundreds are dying. The world must act." Italy ended its large-scale search-and-rescue mission Mare Nostrum last year because of the cost and amid criticism from some who said it merely encouraged people to make the crossing. Mare Nostrum was set up after more than 360 migrants drowned when their boat capsized near the Italian coast in October 2013. It has been replaced by an EU border control mission, Triton, that does not have a specific search-and-rescue mandate and which has fewer ships and a smaller area of operation that hugs close to the Italian coast instead of reaching toward Africa like Mare Nostrum did. Including those estimated to have been in the four boats, some 350 migrants have died since the start of 2015, compared to 12 who lost their lives during the same period last year, when Mare Nostrum was still in place. "What we have from the EU is not a response ... to the scale of the crisis we have to face," the UNHCR's Sami told Reuters. Dimitris Avrampoulos, EU commissioner for migration, said on Twitter on Monday: "The drama is ongoing. Our fight against smugglers continues in a relentless & coordinated way. More has to be done. Lampedusa." On Tuesday, Italian Interior Minister Angelino Alfano appealed for a "more vigorous" European response to the crisis, and Foreign Minister Paolo Gentiloni said the EU's Triton mission "is not enough", according to Italian media. Pope Francis told pilgrims in St. Peter's Square on Wednesday that he was "following with concern the news out of Lampedusa". He said he would "again encourage solidarity so that those in need are rescued".