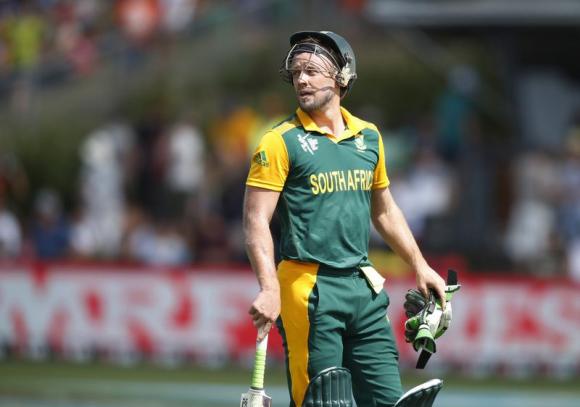 SYDNEY (Reuters) - The threat of a one-match ban for slow over rates is heaping extra pressure on AB de Villiers ahead of Friday's World Cup clash against West Indies, the South Africa skipper admitted on Thursday. De Villiers was fined 20 percent of his match fee after South Africa were found to be one over short of their target during their 130-run drubbing at the hands of India last Sunday. One more minor infraction by his team in any of their remaining matches will see the Proteas forced to play without their leader and top batsman for one game. "I think all the captains are under pressure in this tournament. They're very strict with that in this particular tournament you get one warning and then you're suspended," de Villiers told reporters at the Sydney Cricket Ground. "They're a little bit more lenient with normal cricket series around the world, which is understandable. This tournament is under the spotlights, and it heats you up the right way. "So I'm under pressure. Yes, we know that. We've had a good discussion about it. There is nothing else you can do about it except just get it right." South Africa suffer more than many teams because of their reliance on a three-prong pace attack with fast bowlers taking much longer run-ups and needing more recovery time than spinners. De Villiers said that would not change and the other members of the team would have to speed up their game to compensate. "It's one of those things you've just got to get the intensity for 50 overs, which is not easy," de Villiers added. "It's easier said than done, believe me. But we have the guys and obviously the part-time bowlers will have to help in that. "The seamers need time. They need time to get the marks and get the fields right. And those longer run-ups they get tired. "So it's understandable for a seamer to waste a bit more time, but the fielders have got to get the intensity up. We've spoken about it at length, and I believe the boys will react."