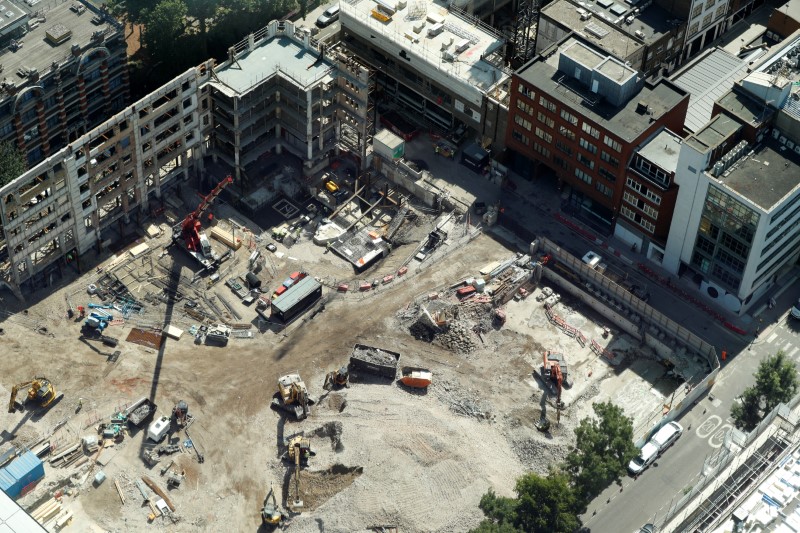 LONDON (Reuters) - The pace of growth in Britain's construction industry slowed over the second quarter as investment was delayed by uncertainty over Brexit and the general election, a leading property body reported on Thursday.

The quarterly survey from the Royal Institution of Chartered Surveyors showed a reversal from the first quarter, which saw growth accelerate at its strongest pace since the June 23, 2016 referendum on leaving the European Union.

A net balance of 21 percent respondents reported an increase in total workload in the second quarter, down from 27 percent recorded in the previous quarter, RICS said.

The private commercial and industrial segments felt the sharpest slowdown.

The UK property market has been one of the most prominent casualties of the Brexit vote, with many developers tempering construction plans to reduce the risk on the books and given widespread concern that companies will rent less space.

Banks have tightened lending criteria as well, making it tougher for smaller builders or those with limited funds to start new projects.

The UK RICS Construction and Infrastructure Market survey showed that financial constraints, due to economic uncertainty driven largely by Brexit and the subsequent election, was noted as the most significant impediment to building activity.

The survey said 79 percent of all respondents cited it as a concern, marking the highest level in four years. Other reasons included difficulties with access to bank finance and credit and cash flow and liquidity challenges.

"Economic and political uncertainty appear to be weighing on sentiment, but all things considered, current conditions and year-ahead workload expectations are holding up rather well relative to the longer-term trend," said Jeffrey Matsu, Senior Economist at RICS.

"Given the ongoing nature of Brexit negotiations, it remains to be seen what impact this will have on financial conditions," he added.