SARGODHA (92 News) – Air Chief Marshal Sohail Aman has said that the Pakistan Air Force is playing a lead role in the anti-terrorist operations; however, the conventional threat cannot be ignored and the PAF is fully geared up to respond any threat befittingly. He was addressing the Graduation Ceremony of 45 th Combat Commanders’ Course held at Combat Commanders School, Sargodha on Friday. He was the chief guest on the occasion. Air Chief Marshal Sohail Aman said: “Combat Commanders’ School remains the pivot of PAF combat training and it has to evolve at great pace to keep abreast of the latest trends in Air Power employment. We should strive for nothing less than excellence and optimally utilize the assets with our focus on flight safety. The operational exercises conducted here have provided a quantum leap in grooming PAF’s operational crew at all levels.” Later, he awarded certificates and trophies to the graduating officers who underwent a strenuous and professionally demanding course. The Chief of the Air Staff Trophy for the best Combat Commander was awarded to Squadron Leader Hammad Farooqi, while Air Officer Commanding Air Defence Command Trophy for best Combat Controller was awarded to Squadron Leader Muhammad Saleem. The ceremony was attended by Principal Staff Officers and field commanders of the Pakistan Air Force. 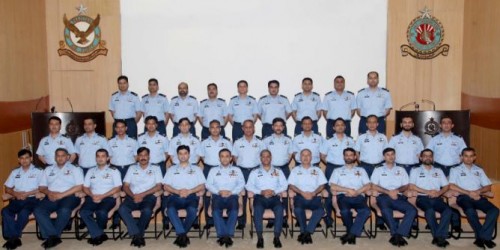