ISLAMABAD – The final three Pakistan Aeronautical Complex (PAC) JF-17 Thunder Block II multirole combat aircraft are set to be delivered to the Pakistan Air Force (PAF) by late June. This was announced by PAF Air Chief Marshal Mujahid Anwar Khan during an interview with Jane’s, a foreign magazine. The aircraft are part of an order placed by the PAF in late 2017 for an additional 12 platforms that are currently on the Aircraft Manufacturing Factory (AMF) final assembly line at PAC Kamra. AMF has built more than 100 JF-17s since the first JF-17 (serialled 09-111) was rolled out in November 2009. 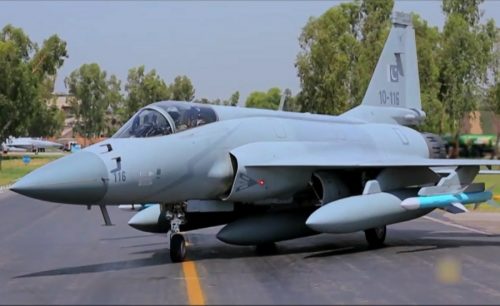 Production of the Block III variant is expected to begin later this year PAF Air Chief Marshal Mujahid Anwar Khan told Jane's, adding that the service "will make a decision on one of the two new Chinese AESA [airborne electronically scanned-array] radars we are currently evaluating for these aircraft". He noted that, although supportability and cost will be factors in the decision, the service hopes to have the aircraft operating with the new radar by March 2020. The Nanjing Research Institute of Electronics Technology's KLJ-7A radar is being marketed by China Electronics Technology Group Corporation (CETC) with air-cooling and liquid-cooling options. The second contender is Leihua Electronic Technology Research Institute (LETRI), which offers an air-cooling AESA radar known as the LKF601E. Meanwhile, the Aircraft Repair Factory (ARF) at PAC Kamra recently completed its first 1,000th hour inspection on the first JF-17. This comes after PAC Kamra and China's Chengdu Aircraft Industry Corporation (CAC), which co-developed the fighter, worked on two JF-17s each to develop the working procedures.