PAF will thwart any misadventure by enemy: Air Chief

PAF will thwart any misadventure by enemy: Air Chief

ISLAMABAD (92 News) – Pakistan Air Force (PAF) Chief of the Air Staff Marshal Mujahid Anwar Khan  visited Forward Operating Airbases of Pakistan Air Force. “We are peace loving nation but if the war is imposed on us, we would defend the aerial frontiers of our motherland at every cost,” the PAF air chief stated while he was interacting with the combat crew, during his visit to forward operating airbases of PAF on Sunday. 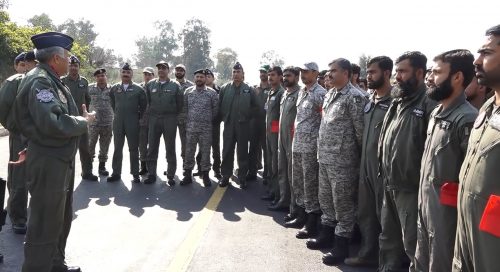 PAF alongside other defence forces are ever ready to take on all kinds of challenges with operational preparedness and immaculate synergy" he said while interacting with the combat crew. 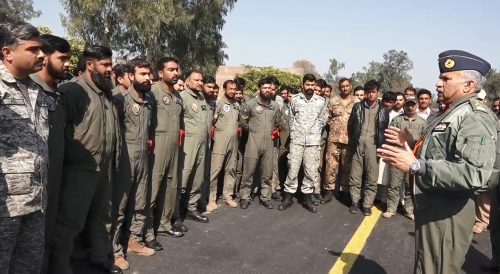 “Pakistan Air Force would thwart any misadventure by the enemy and is ready to respond with full force as per the aspirations of the nation,” he said. The air chief showed satisfaction over the operational preparedness of bases and also lauded the high morale of the combat crew.

Earlier, Mujahid Anwar Khan visited the headquarters of UAE Air Force during his visit to UAE. On his arrival, a smartly turned out contingent of UAE Air Force presented him the Guard of Honour. Later, Air Chief called on Commander UAE Air Force and Air Defence Ibrahim Nasser Mohammad Al-Alaw in his office. During the meeting the Air Chief said the excellent mutual cooperation had always been a matter of pride for both the sides. Commander UAE Air Force lauded the glorious history of Pakistan Air Force and also acknowledged the endeavours made by PAF in modernization and indigenization of its fleet in recent years. Both the dignitaries discussed ways and means to further enhance and continue exemplary mutual cooperation between the two air forces.