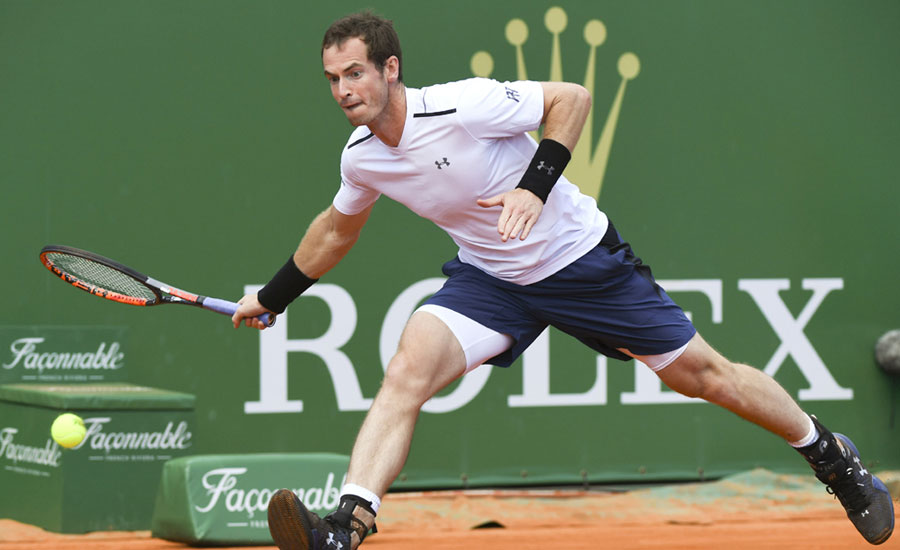 LONDON (Reuters) - Britain’s Andy Murray made a successful return to action after six months out following hip surgery as he partnered Feliciano Lopez to a first-round doubles win at the Queen’s Club championships on Thursday.
Tennis - ATP 500 - Fever-Tree Championships - The Queen's Club, London, Britain - June 20, 2019 Britain's Andy Murray in action during the round of 16 doubles match against Colombia's Juan Sebastian Cabal and Robert Farah Action Images via Reuters/Tony O'Brien
The 32-year-old, five-times a winner of the singles at the prestigious Wimbledon warm-up event, delighted a large evening centre court crowd with some fluent shot-making as he and Spanish veteran Lopez beat top seeds Juan Sebastian Cabal and Robert Farah 7-6(5) 6-3. Murray, who missed most of 2018 with a hip injury, last played at the Australian Open in January when it appeared his career might be over following an emotional second-round defeat by Roberto Bautista Agut. The two-times Wimbledon champion, by far Britain’s most successful player in modern times, underwent hip-resurfacing surgery shortly after that but has been coy about his chances of making a return to the singles court. While not too much can be read into Thursday’s doubles win, Murray certainly appeared to be moving without the trademark limp that was present when he played his last singles match at Wimbledon two years ago — a loss to Sam Querrey. He had the crowd roaring their approval, producing two crunching forehand winners to secure a vital break of serve in the second set and a superb backhand overhead volley in the last game as he and Lopez closed in on victory over the Colombians who will rue such a demanding draw. “It was brilliant. I enjoyed it a lot. I was a little bit slow at the beginning but got better as the match went on,” former world number one Murray said. “I’m very fortunate to be back playing tennis again. I love playing on this court, it’s a brilliant place to play tennis. “I felt quite relaxed in the build-up today but I started to feel a bit nervous walking to the court. You want the nerves and the butterflies in the stomach and I had that today.” Murray later said he had been “pain free” and confirmed he would play with Frenchman Pierre-Hugues Herbert in the Wimbledon men’s doubles and would also play mixed. “I have spoken to a couple of players. I’ve been rejected a couple of times so far,” Murray joked.