CHITRAL (92 News) – Army troops are continuing flood relief and rescue operation in Chitral and Southern Punjab, said a press release issued by the ISPR. In Chitral, 17.5 tons of food items have been distributed so far and 164 effected people were rescued by two MI-17 helicopters from Rambur, Kurggh, Birri, Bumboret and Chashma to safer places. Road N-45 has been opened by Army engineers for all type of traffic up to Chitral, whereas road from Chitral and Buni is open for light traffic only. Work on Chitral-Bubmoret Road is in progress, while Buni-Masting Road is being repaired. Gilgit-Baltistan: The 40 km damaged road in Astore District has been repaired, while restoration of roads in Hunza, Skardu, Khaplu and Ghanche is in progress. Four relief/medical camps have been established in Shiger, Khaplu and Hunza. Tents and cooked food have been provided to affectees in relief camps. Cooked food was also provided to over 2,000 families in Waziristan and Shigar and a sufficient quantity of cooking oil has been provided to affected people of Khaplu. Relief goods have also been provided in Hisper, Hunza district. Southern Punjab: As many as 71 people were rescued at Jhakr Imam in DG Khan area, while Army troops with boats. Out Boat Motions (OBMs) and life jackets have been employed at flood-hit places in Rajanpur, DG Khan, Muzaffargarh and Layyah. Two medical camps have been established in Rajanpur and Layyah. Meanwhile, army troops in collaboration with civil administration have evacuated 13,893 people in Rahimyar Khan, Sadiqabad, Khanpur and Liaquatpur during last two days. 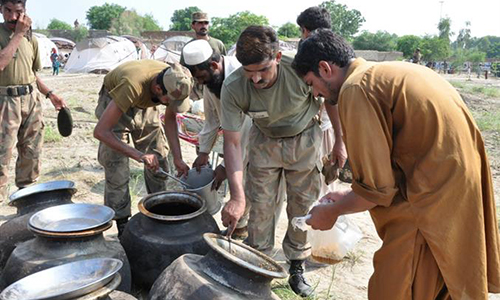