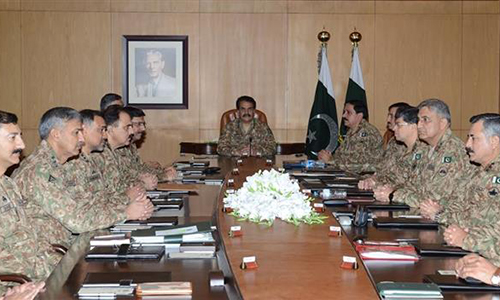 RAWALPINDI (92 News) – Chief of Army Staff General Raheel Sharif has said that the armed forces are ready to deal with every threat and aggression. Presiding over the Corps Commander's Conference on Tuesday, he expressed satisfaction over a change in the overall security situation of the country. About the ongoing peace talks between Afghan government and Taliban, the COAS said that it is the only credible way to achieve lasting peace. “Detractors and spoilers are against peace and prosperity of Afghanistan and the region,” he added. During the meeting participants discussed internal and external security situation in the country and reviewed progress of Operation Zarb-e-Azb and ongoing intelligence-based operations (OIBs) in the country. The meeting also reviewed the violation of ceasefire by Indian forces along the Line of Control.