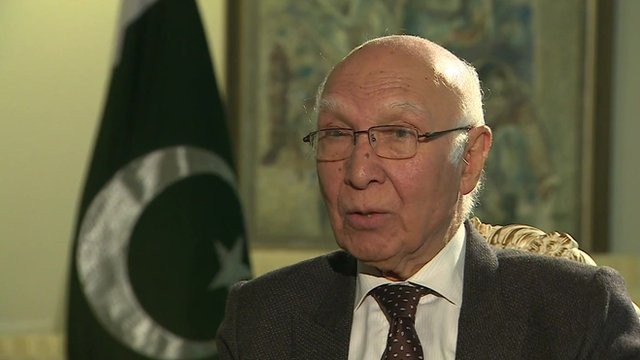 ISLAMABAD (92 News) - Adviser to the Prime Minister on Foreign Affairs and National Security Sartaj Aziz has said that Pakistan has received a proposal from India of a meeting between National Security Advisors of the two countries. In a statement on Sunday, Sartaj Aziz said that India proposed 23rd and 24th of this month for the meeting of National Security Advisors of both the countries. "Pakistan has not yet confirmed the proposed meeting," he said. "The agenda of the meeting has also not yet fixed, however, matters related to the Gurdaspur incident, firing along the line of control and others important issues are expected to be discussed in the meeting. Foreign Office Spokesman, Qazi Khalil Ullah, confirmed that key officials of both the countries are in contact ahead of the meeting.