KARACHI (92 News) – Chief of the Naval Staff Admiral Zafar Mahmood Abbasi visited naval installations at Coastal Areas, including Turbat, Gwadar and Jinnah Naval Base Ormara, to review operational readiness of Pakistan Navy Units in the area and port security measures. This is the premiere visit of Coastal Area by Naval Chief after assuming the Command of Pakistan Navy. Upon arrival at Naval Air Station Turbat, the Naval Chief was received by Commander Pakistan Fleet Rear Admiral Mohammad Amjad Khan Niazi. He was given a detailed briefing on operations of PNS SIDDIQ, operational preparedness, prevailing security situation, ongoing developmental plans for socio-economic uplift of local populace and measures taken for nation-building. 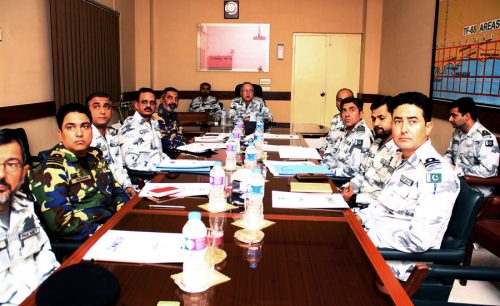 Chief of the Naval Staff Admiral Zafar Mahmood Abbasi expressed satisfaction over operational preparedness of Pakistan Navy and envisioned that PNS SIDDIQ Naval Air Base as a significant milestone towards enhancing PN’s operational capability, will lead to commercial flying activities, which would act as a catalyst for economic development in the hinterland of Balochistan. Admiral Zafar Mahmood Abbasi also highlighted that other civic facilities including PN Model School Turbat will enable local populace, access to quality services at their door step and set off a new era of prosperity in the region in consonance with Pakistan Navy’s resolve of Nation Building efforts. Later during the day, the Naval Chief visited Pakistan Navy units at Gwadar and Ormara and was briefed on various ongoing and future Pakistan Navy projects & plans as well as operational activities and security aspects of Gwadar Port particularly with respect to Maritime Components of CPEC Project. 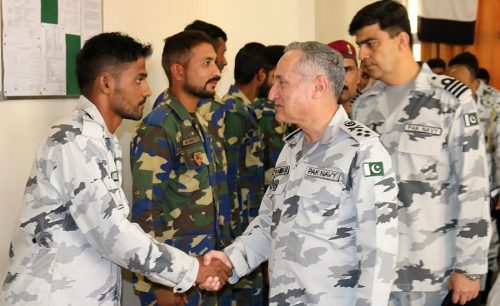 While making an overall appraisal of the prevalent security environment, Chief of the Naval Staff expressed satisfaction over operational preparedness of Pakistan Navy in the presence of prevalent Maritime challenges. The Naval Chief, while expressing Pakistan Navy’s resolve to ensure seaward defence of vital maritime infrastructure and protection of the maritime interests of Pakistan against all threats, reiterated that Pakistan Navy will safeguard maritime frontiers of Pakistan at all costs. The Chief of the Naval Staff also interacted with officers and men deployed at Turbat, Gwadar and Ormara. The Admiral applauded their commitment and dedication in safeguarding the maritime frontiers of the country and urged them to nurture and align their character with the golden principles of Islam and make Islamic teachings as guiding lights of their lives, in tandem with strenuous pursuit of professional excellence.