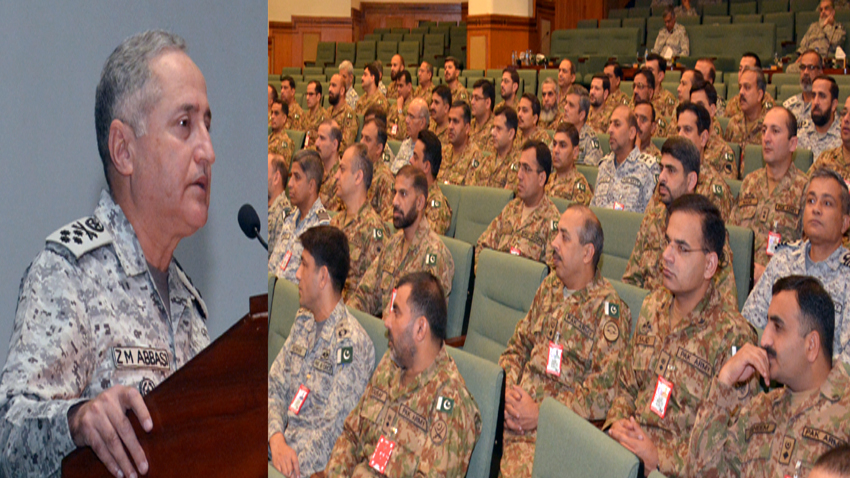 KARACHI (92 News) – Naval Chief Admiral Zafar Mahmood Abbasi has said that Pakistan Navy is all time ready to cope with maritime security challenges faced by the country. He was addressing the participants of a course at National Defence University in Islamabad on Tuesday. Admiral Zafar Mahmood Abbasi said Pakistan Navy is being made an impregnable force in all four dimensions. The naval chief dilated upon his vision about Pakistan Navy and ongoing projects of the force. He said we as a nation need to exploit the maritime resources associated with CPEC and Gwadar Port. He said Pakistan is endowed with rich water resources that can help strengthen the national economy. Zafar Mahmood Abbasi directed the course participants to get guidance from Islam and Ideology of Pakistan for their future course of action. Earlier on April 23, in an impressive fire power display, Pakistan Navy had successfully test fired missile in the North Arabian Sea. According to Pakistan Navy spokesperson, the indigenously developed Cruise Missile, had Anti-Ship and Land Attack capability. Vice Admiral Kaleem Shaukat, Vice Chief of the Naval Staff  had witnessed the live firing onboard Pakistan Navy Ship. On Mrach 28, Chief of Naval Staff Admiral Zafar Mahmood Abbasi said urged the field commanders to maintain highest state preparedness.

Command and Staff Conference of Pakistan Navy concluded at Naval Headquarters, Islamabad. The conference was chaired by naval chief. The matters related to operational preparedness, prevailing security situation and developmental plans of Pakistan Navy were reviewed.

Chief of the Naval Staff was given detailed briefings on various ongoing and future Pakistan Navy projects and plans. While taking stock of the prevalent standoff with our adversary, the naval chief lauded the commands on timely deployment of Pakistan Navy assets. He also expressed his full confidence on PN’s preparedness and resolves to deter and foil any misadventure by our foe with a befitting response. In the midst of challenging and evolving security environment, Pakistan Navy will continue to maintain a high level of readiness. He also urged the commanders to remain prepared and maintain a constant vigil in their Area of Responsibility.