ISLAMABAD (92 News) – Saudi Crown Prince Mohammed bin Salman said that the Pak-Saudi relations span over decades. Addressing a ceremony held to confer him with the Nishan-e-Pakistan at President House on Monday, he thanked President Dr Arif Alvi for conferring him with the highest civil award Nishan-e-Pakistan. The Saudi crown prince said that two million people are working in Saudi Arabia. “Pakistani skilled workers are playing their role in the progress of Saudi Arabia. A large number of Pakistanis are serving in Saudi Arabia,” he maintained. He also announced to establish a health centre in Khyber Pakhtunkhwa, which will be attributed to Farman Ali Khan who saved 14 lives during the floods. Crown Prince Mohammed bin Salman said that Pak-Saudi relations are based on religious respect. “The relations between both countries are strengthening with the passage of time,” he said. 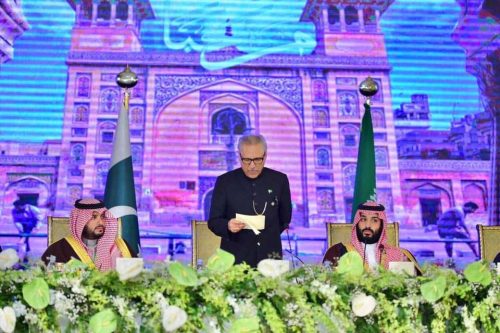 Speaking on the occasion, President Dr Arif Alvi said that the Saudi crown prince’s visit will strengthen friendship between both countries. “The people of Pakistan have love for Saudi Arabia in their hearts,” he said. The President said that Pakistan and Saudi Arabia have always come up to each trial. “Both countries have the same policy against corruption. He was of the view that friendship of Pakistan is based on religion and culture. The President invited Saudi King Salman to visit Pakistan.