ISLAMABAD (92 News) – Pak-Turk International Cag Education Foundation (PTICEF) was declared as “proscribed organization” on Wednesday here. The federal government has imposed a ban on PTICEF; however, Interior Ministry issued a notification regarding this matter and sent to all the concerned ministries and institutions. Under the law, Fethullah Gülen’s PTICEF organization was listed into ‘First Schedule’, whereas, the foundation was declared a banned organisation on April 18. The entity was listed among outlawed organisations under Section 11-B of the Anti-Terrorism Act – 1997 on solid evidences of its connections with terrorists, the notification said. 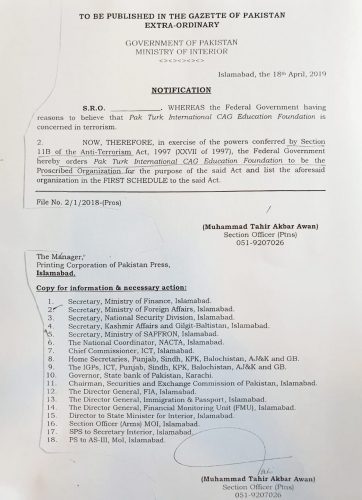 On April 16, the Supreme Court had rejected a review appeal filed by Pak-Turk International Cag Education Foundation (PTICEF) against the court decision to declare it a banned organisation. Justice Azmat Saeed Khosa heading a three-member bench remarked that the plea was inadmissible. The bench said the Turk government had also declared PTICEF a banned organization. Justice Ejazul Hassan said other 40 countries had also banned the outfit. The lawyer representing the firm said the organization was being funded by none other than Turkish people. He said these schools were not shut down in Malaysia. “You can also leave for Malaysia [if you want], remarked Justice Khosa. He said other terror organizations could also open institutions in the country. Justice Khosa stated that the administration was funding money laundering and terrorism in Pakistan. He referred to the lawyer that “you can not defend a terror outfit in the court.” On Dec 31, 2018, the Supreme Court had released a 15-page verdict of the three-member bench written by Justice Ijaz-ul-Ahsan and ruled that the entity a proscribed organization and ordered that the control of the schools run by the PTICEF, be handed over to Turkiye Maarif Foundation. A lawyer Sohail Sajid had filed a constitutional petition in the apex court and requested it to declare the group a terrorist outfit in Pakistan. The bench announcing its verdict in the case, ordered the interior ministry to add the name of PTICEF in the first schedule to Section 11-B of the Anti-Terrorism Act, 1997. Pak-Turk schools are administered by a foundation linked to Fethullah Gulen, who is being named by the Turkish leadership in the abortive coup attempt in July 2016.