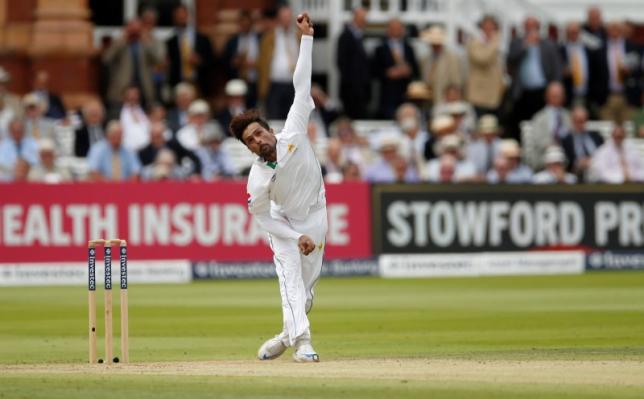 LONDON – Yasir Shah's five-wicket haul gave Pakistan the edge on the second day of the first Test against England, who suffered a middle order collapse to close on 253-7, 86 runs shy of the tourists' first-innings total on Friday. After Pakistan were dismissed for 339 early in the day, having added 57 runs to their overnight total, England sailed to 118-1 after lunch at Lord's. Yasir, however, turned momentum in Pakistan's favour, ripping through England's middle order to claim his fifth five-wicket haul in 13 Tests. It was also a good day for Pakistan's Mohammad Amir, who was bowling for the first time in a Test since being banned for spot-fixing and claimed the wicket of Alastair Cook for 81. That prompted a clenched-fist celebration from Amir, who had served half of a six-month prison sentence and was banned for five years for deliberately bowling no-balls against England at the same ground in 2010. Earlier, England all-rounder Chris Woakes notched his first five-wicket Test haul to restrict the visitors to a moderate first-innings total. Woakes, who ended the innings with figures of 6-70, struck twice in the same over to pick up the wickets of Sarfraz Ahmed and Wahab Riaz. Stuart Broad then ended Misbah-ul-Haq's superb innings on 114, with the Pakistan skipper having added just four to his overnight tally. The England bowler then enticed Amir, who was greeted with a ripple of applause as he came out to bat, to edge the ball to Joe Root at slip on 12. The tourists drew blood soon after the changeover when England opener Alex Hales edged an impeccable outswinger from Rahat Ali to Azhar Ali at third slip in the second over. Cook and Root took England past lunch and deep into the afternoon before the latter top-edged Yasir to Mohammad Hafeez for 48 to begin the collapse. James Vince (16) and Gary Ballance (6) were then trapped lbw by Yasir before Amir, who had been treated to a few shouts of 'no-ball' from the crowd after his first delivery, tempted Cook to swipe at a wide delivery which he played on to his own stumps. Jonny Bairstow (29) was bowled by Yasir, who then became the first leg-spinner since Mushtaq Ahmed in 1996 to take five wickets at Lord's when he trapped Moeen Ali lbw for 23. England will begin Day Three with Woakes unbeaten on 31 and Broad on 11. –Reuters