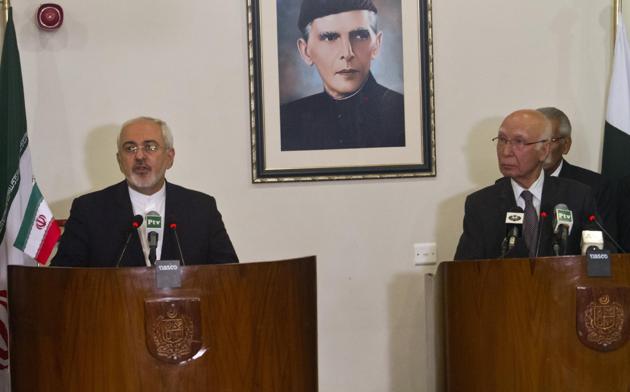 ISLAMABAD (92 News) – Pakistan and Iran on Thursday have expressed the resolve to expand bilateral cooperation in diverse fields including economy, trade, energy and border management for peace and security in the region. The understanding came at a meeting between talks between Advisor on Foreign Affairs Sartaj Aziz and Iranian Foreign Minister Javad Zarif in Islamabad on Thursday. Addressing a joint press conference, Adviser to Prime Minister on National Security and Foreign Affairs Sartaj Aziz said that the two sides agreed to effectively utilise the existing institutional mechanism for bilateral interactions. The Iranian foreign minister Javad Zarif said that the matters relating to extremism and regional situation. He said that unity among the Muslim nations is the need of the hour, adding that the development in the region is possible only after eliminating extremism and terrorism. “Iran fully supports the Afghan peace process,” says Javad Zarif. Sartaj Aziz hoped that the suspended peace process between Taliban and Afghan government will start soon.