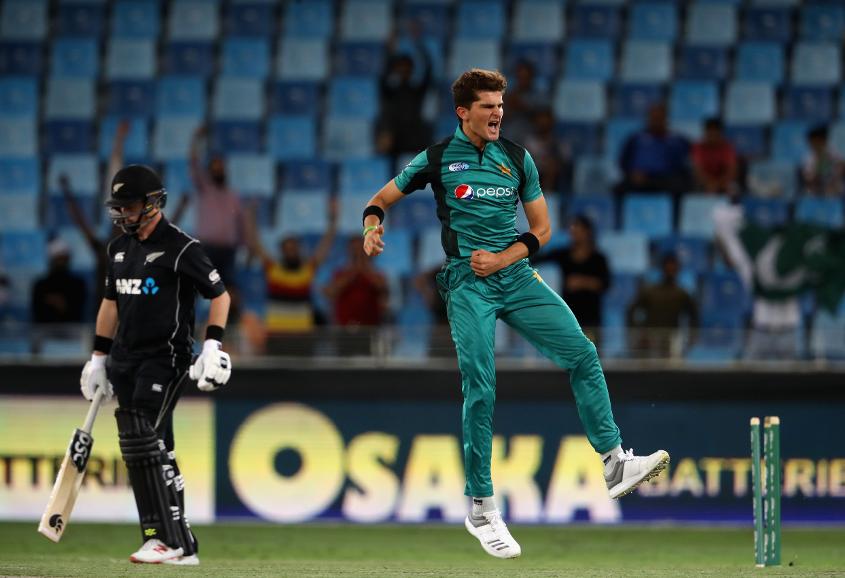 DUBAI (Web Desk) – Rain arrived 6.5 overs into New Zealand’s chase, meaning the series was left tied at 1-1. The game had been building into an exciting one, with Pakistan putting up a strong total of 279/8 thanks to half-centuries from Fakhar Zaman, Haris Sohail, and Babar Azam. The former helped give Pakistan a stable start, with him and Mohammad Hafeez adding 64 for the first wicket. Hafeez struggled to score quickly, and then trod on his stumps for 19, pushed back in his crease by the extra pace of Lockie Ferguson. Zaman carried on to 65 sensibly, but his impulses soon got the better of him, and he danced down and holed out to long-on after playing out a maiden. Sohail then joined Azam in the middle, and the pair put on a century stand, both scoring freely without taking undue risk. Sohail fell just as Pakistan entered the last 10 overs to an excellent catch in the deep, mistiming a flick off a slower ball and finding George Worker, who ran forward and took a low grab. New Zealand were able to stymie Pakistan effectively in the last 10, though Azam ensured Pakistan still made a strong total. He fell for eight runs short of what would have been his ninth ODI century, also miscuing a slower ball, this time off Trent Boult to Henry Nicholls at midwicket. In between, Shoaib Malik made a boundary-less run-a-ball 18 before being caught by Worker on the point fence. Ferguson then gave his own figures a polish and helped New Zealand finish on a high by taking three wickets in the last over, bowling Faheem Ashraf with a slower ball, demolishing Asif Ali’s stumps with a full fast delivery, before Worker claimed his third catch, Hasan Ali holing out. With the Blackcaps needing 280, the game was set up intriguingly. Pakistan and Shaheen Shah Afridi drew first blood in response, with the lanky left-arm seamer nipping one in off the seam through Colin Munro’s gate and into the stumps fourth ball. Worker and Nicholls looked untroubled in adding an unbeaten 32 to help repair from that setback, but then the rains came, and the game was done for.