LAHORE (92 News) – Pakistan cricket selectors, in consultation with the captain and coach, on Monday confirmed their 15-player composition for the ICC Men’s Cricket World Cup 2019, which will be played in England and Wales from May today to July 14. Pakistan had the flexibility to finalise their line-up until May 22, but decided to lock their make-up on Monday following the conclusion of the One-Day International series against England in Leeds. 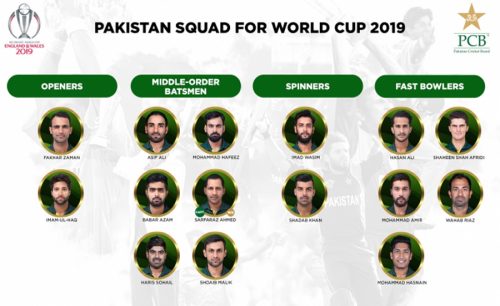 From the 15-player provisional squad, which was announced on April 18, the selectors have replaced Abid Ali and Junaid Khan with Asif Ali and Mohammad Amir, respectively (both were named as additional players), while Wahab Riaz has been recalled to replace Faheem Ashraf. Yasir Shah is the fourth player to be released from the side after he was named as Shadab Khan’s replacement for the series against England. Amir, who is presently in London and has fully recovered from chicken pox, and Wahab is expected to join the squad in Bristol on May 22. Both the players will be available for selection for the May 24 and 26 warm-up matches before Pakistan launches their World Cup campaign against the Windies on May 31 at Trent Bridge. The final make-up of the squad is: Openers – Fakhar Zaman and Imamul Haq Middle-order batsmen – Asif Ali, Babar Azam, Haris Sohail, Mohammad Hafeez, Sarafraz Ahmed (captain, wicketkeeper) and Shoaib Malik Spinners – Imad Wasim and Shadab Khan Fast bowlers – Hasan Ali, Mohammad Amir, Mohammad Hasnain, Shaheen Shah Afridi and Wahab Riaz Chair of Pakistan men’s selection committee, Inzamam-ul-Haq, said the team combination has been revised after taking into account the fast bowlers’ performance against England as well as considering the nature of wickets that are likely to be presented in the World Cup. “Junaid and Faheem had been originally preferred over a few other bowlers based on their recent performances and the investment we had made on them since 2017. They had the opportunity to cement their Word Cup spots, but they were well below-par in the series against England even though they were up against the difficult challenge of bowling on placid and batsmen-friendly wickets. “After it became obvious that the bat is likely to dominate the ball in the World Cup, we revisited our strategy and reverted to the pace of Mohammad Amir and Wahab Riaz. Furthermore, Amir and Wahab give the fast bowling attack more experience to back and support the relatively inexperienced but immensely talent Shaheen Shah Afridi and Mohammad Hasnain.” Wahab has taken 102 wickets in 79 ODIs, including 24 wickets in 12 World Cup matches in 2011 and 2015, while Amir has picked up 60 wickets in 51 matches, including five wickets in Pakistan’s successful ICC Champions Trophy 2017 campaign. Wahab’s last ODI was in the ICC Champions Trophy 2017 against India in Birmingham, while he last represented Pakistan in the Dubai Test against Australia in October 2018. Explaining the decision to recall Wahab, Inzamam said: “The lack of potency of our frontline bowlers in the recent ODI series against England meant that a change was needed. In addition, we now know that we will encounter batting wickets throughout the World Cup campaign. “The combination of both these elements, meant that we believed that right now, utilising the World Cup experience and knowledge of Wahab was the correct choice. “Wahab has been training and playing club cricket, and the player of his calibre will not face much problem in adapting and adjusting to the gruelling demands of the World Cup. In addition, playing in the World Cup warm up matches, bowling his quota, will have him match-ready “The bowling unit during the England ODIs has not clicked as anticipated or expected; if we have at our disposal two vastly experienced pace duo of Amir and Wahab, then it will be foolish not to include them,” says Inzamam. On Abid Ali, Inzamam said: “It has not been an easy decision to leave out Abid, particularly after he got only one opportunity on the tour. But, he was our third choice opener. After both the first choice openers struck early form, we preferred Asif Ali as he brings firepower to the team that can strengthen our chances in the tournament. “Both our openers are in form and average over 50 each. If required, we have a fully fit Mohammad Hafeez who can be promoted in the batting order, while Haris Sohail can be the another option.” Pakistan squad for ICC Men’s Cricket World Cup 2019: Pakistan cricket team’s schedule of ICC Men’s Cricket World Cup 2019 matches: 24 May – v Afghanistan (warm-up), Bristol (d) 26 May – v Bangladesh (warm-up), Cardiff (d) 31 May – v Windies, Trent Bridge (d) 3 June – v England, Trent Bridge (d) 7 June – v Sri Lanka, Bristol (d) 12 June – v Australia, Taunton (d) 16 June – v India, Old Trafford (d) 23 June – v South Africa, Lord’s (d) 26 June – v New Zealand, Edgbaston (d) 29 June – v Afghanistan, Headingley (d) 5 July – v Bangladesh, Lord’s (d/n)

PTI govt will have to be sent home if people want to get rid of inflation: Bilawal Bhutto