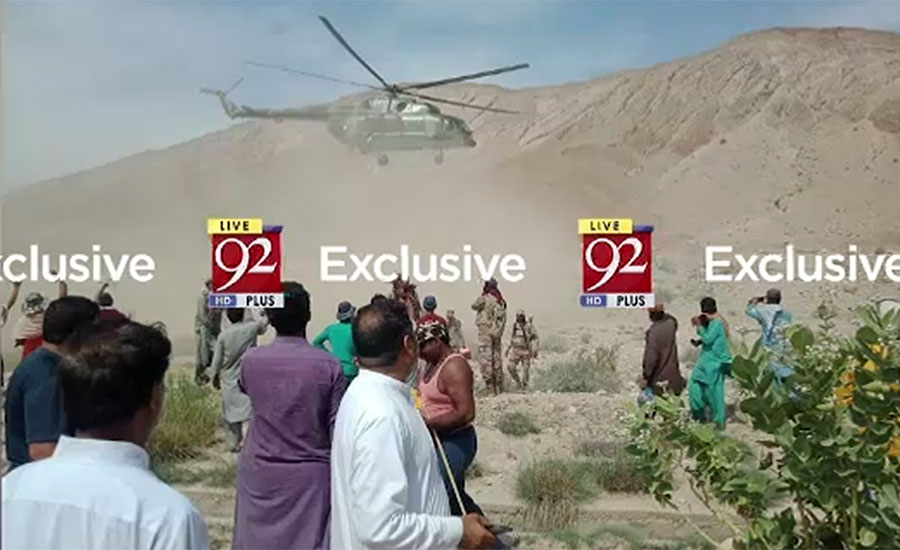 KACHHI (92 News) – Pakistan Army rescued 150 Hindu yatrees, trapped in a mountainous region of Shoran following flood situation in Balochistan, on Sunday. According to the details garnered, during the rescue operation, the locals also participated along with the Pakistan Army. The pilgrims have been shifted to a safe place through helicopter. The Hindu pilgrims were being shifted to PMDA camp through helicopter while the rescue operation will be continued for one hour. Hindu yatrees were trapped in suburban areas of Hari Mandir [temple] situated in Bolan’s Sukleji and sought help from the Balochistan government. Following the rescue operation, Balochistan Chief Minister Jam Kamal Khan expressed satisfaction and he already had directed the commissioner and deputy commission of Naseerabad to take immediate measures for the safe evacuation of the visiting Hindu yatrees. It is worth mentioning here that the Hindu pilgrims were trapped in the area on Saturday after heavy rains. The local administration and Frontier Corps (FC) officials traced them to ensure their safety. Balochistan is facing flood-like situation following a new spell of heavy rainfall and thunderstorm hit the province, claiming at least 13 lives and more than 100 persons were missing so far. Earlier, the Provincial Disaster Management Authority (PMDA) spokesperson said that authorities have started a rescue operation to evacuate the trapped Hindu yatrees.

Rain and snowfall continued to lash several cities in Balochistan during the last 24 hours. The snowfall is continuing in Quetta, Kalat and Ziarat, increasing the chilly weather. According to the Met Office, a fresh westerly wave is currently affecting Balochistan and is likely to persist over upper parts of the country till Monday night. Weather Forecast for Sunday Widespread rain-thunderstorm and snowfalls over the hills (with isolated heavy falls) accompanied by gusty winds is expected in Balochistan (Quetta, Zhob, Sibbi, Nasirabad divisions), while at scattered places in Makran, Multan, Bahawalpur, Sukkur, Larkana, Shaheed Benazirabad divisions. Rain coupled with thunderstorm is also expected at a few places in Karachi, Hyderabad and Sahiwal divisions. Heavy falls may generate flash flooding in local nullah/riverine in Quetta, Zhob, Sibbi and Kalat divisions. Rain-thunderstorm (with snowfalls over the hills) is expected at scattered places in upper Khyber Pakhtunkhwa, Upper Punjab, Islamabad, Kashmir and Gilgit-Baltistan during night.