RAWALPINID (92 News) – Pakistan Army defeated the visiting Australian Army team by 105 runs in the first T20 match at Army Cricket Ground on Thursday. After winning the toss, Pakistan Army amassed 199 runs in 20 overs. However, the Australian players could score only 95 runs for seven wickets. Naik Shahid Khan was declared the man of the match for his all-round performance. The lone one-dayer will be played at Marghazar Cricket Ground, Islamabad on Friday. The second T20 match will be played at Army Cricket Ground on April 25. [caption id="attachment_18542" align="alignnone" width="240"] 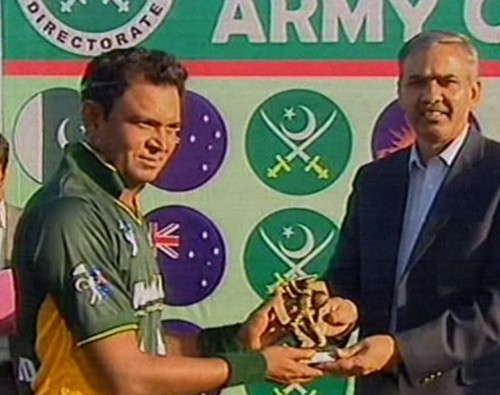 Naik Shahid Khan receives the man of the match award.[/caption]