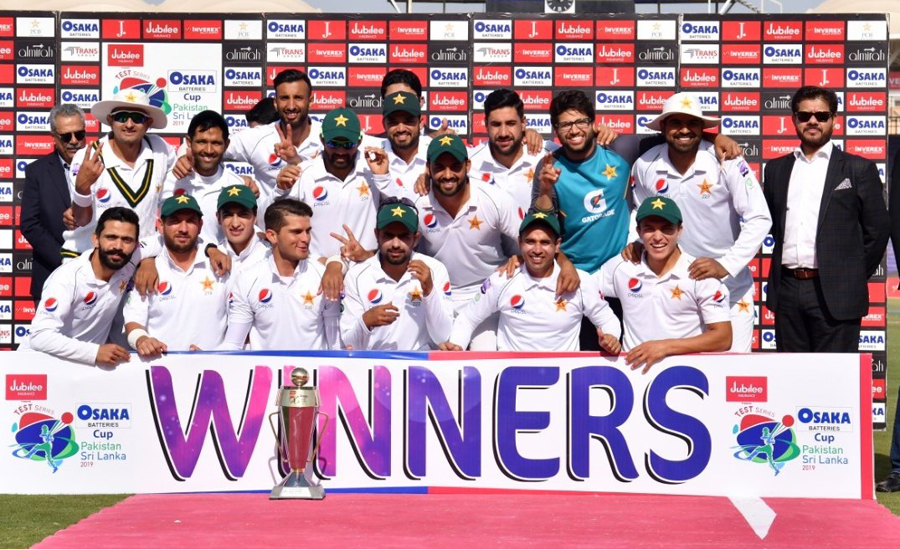 KARACHI – Three overs on the final day was all it took for Pakistan to seal a 263-run victory in the second Test against Sri Lanka in Karachi on Monday.

It was Pakistan’s first Test victory on home soil in over 13 years; their last victory in Pakistan also came in Karachi, against West Indies in November 2006. Naseem Shah, the 16-year-old, resumed the day on 3/31, and went on to dismiss Lasith Embuldeniya and Vishwa Fernando in his consecutive overs to seal the victory, with Yasir Shah claiming the big wicket of Oshada Fernando, the opener, who finished on 102. The two wickets meant Shah ended with 5/31 – his first five-wicket haul in Test cricket – and with Shaheen Shah Afridi, the 19-year-old, claiming a five-for in the first-innings, the Test has been a good one for the young Pakistani pacemen. Sri Lanka were in the Test for the first two days. They bundled out Pakistan for 191 in the first innings, and then posted a lead of 80. However, thereafter, it was all Pakistan. Centuries from Shan Masood, Abid Ali, Azhar Ali and Babar Azam helped the home side post 555/3 declared in the second innings, and bogged down by the weight of runs, the Sri Lankan batsmen crumbled. They were reduced to 212/7 by stumps on the fourth day, with Oshada’s century and Niroshan Dickwella’s half-century their only displays of resistance, and on resumption on the fifth morning, they just weren’t allowed to muster a fightback. The series victory means Pakistan move up to No.3 on the ICC World Test Championship table, with 80 points from their four matches. Sri Lanka are level on points after four matches as well, but are fourth on the table due to their inferior runs-per-wicket ratio.