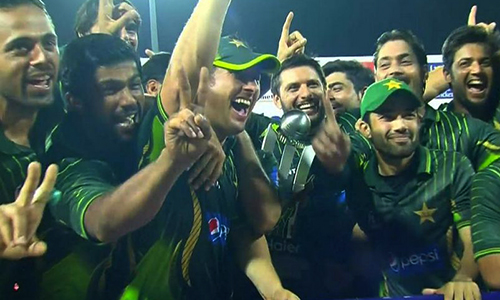 COLOMBO – Pakistan ended their tour of Sri Lanka with a dramatic one-wicket victory in the second Twenty20 on Saturday to complete a 2-0 series win, having also triumphed in the Test and ODI encounters. The tourists, chasing a target of 173, slumped to 40 for five before a swashbuckling knock from captain Shahid Afridi and a late assault by number nine batsman Anwar Ali saw them home with four balls to spare. Two wickets in paceman Binura Fernando's second over and two run-outs meant Pakistan made a woeful start and it took a counter-attack from Afridi to revive their hopes. He smashed four sixes and a four in a 22-ball 45 and added 61 runs in 37 balls with Mohammad Rizwan (17). Pakistan then lost Rizwan and Afridi in the space of a few deliveries as they were reduced to 107 for seven but Anwar belted four sixes and three fours in a 17-ball 46, adding 58 for the eighth wicket with Imad Wasim (24 not out). However, there was more drama to unfold as Anwar was caught behind and Sohail Tanvir run out before Wasim hit a six off Fernando to win the match and leave the young Sri Lankan team crestfallen. Earlier, debutant Shehan Jayasuriya and Chamara Kapugedera led the home team to a total of 172 for seven after they won the toss. Jayasuriya cracked three fours and two sixes in a 32-ball 40 while Kapugedera provided a late surge with an unbeaten 48 off 25 deliveries. –Reuters