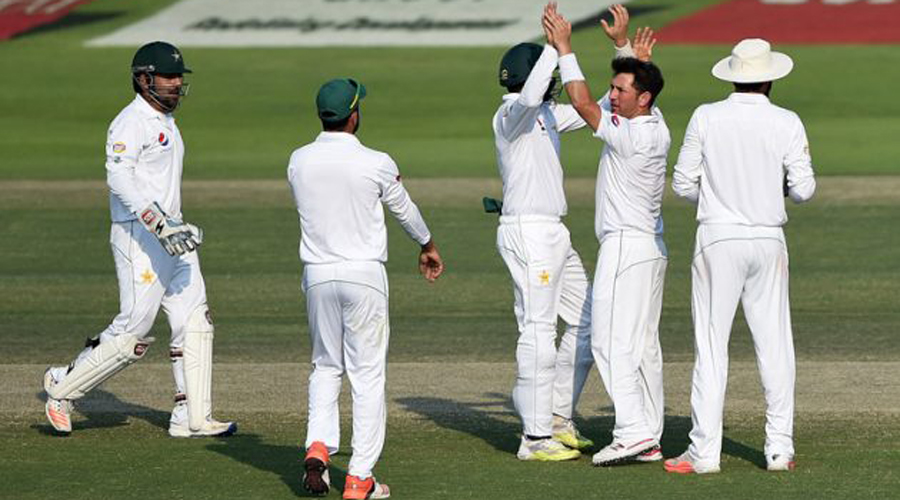 ABU DHABI – Pakistan defeated West Indies by 133 runs in the second Test on Tuesday. A six-wicket haul from Yasir Shah helped Pakistan beat the West Indies by 133 runs in the second Test in Abu Dhabi on Tuesday (October 25). With the victory, Pakistan took an unbeatable 2-0 lead in the three-match series. The West Indies was bowled out for 322 before tea on the fifth day at Sheikh Zayed Stadium. Shah ended with 6 for 124, to go with his first-innings four-wicket haul, bagging his second ten-wicket haul in Test cricket. Jermaine Blackwood's fighting 95 went in vain. The West Indies was set a mammoth and improbable 456 runs to square the series but it fought hard and batted for 108 overs in its second innings. Resuming on the final day at 171 for 4, Blackwood and Roston Chase began solidly but Shah struck in the tenth over of the day, forcing Chase to edge to wicketkeeper Sarfraz Ahmed with one that turned big. Once the 63-run association was brokrn, Blackwood continued to defy Pakistan with another half-century (57 runs) stand with Shai Hope for the sixth wicket. Blackwood was in a fairly aggressive mood, hitting 11 boundaries in his 127-ball innings. But just when the fight seemed on, Shah bowled Blackwood with a straighter ball that went through the gate to deny the batsman his second Test century. Shah then trapped Holder leg before on 16 to complete his second five-wicket haul of the series. Hope, who made 41, extended the battle post lunch with a 45-run eighth-wicket stand with Devendra Bishoo, before left-arm spinner Zulfiqar Babar (2 for 51) dismissed both to complete the victory. Between the two wickets, Shah dismissed Miguel Cummins, bowled for nought, to finish the match with figures of 10 for 210. Pakistan had won the first Test by 56 runs in Dubai. The third and final Test starts on Sunday in Sharjah.