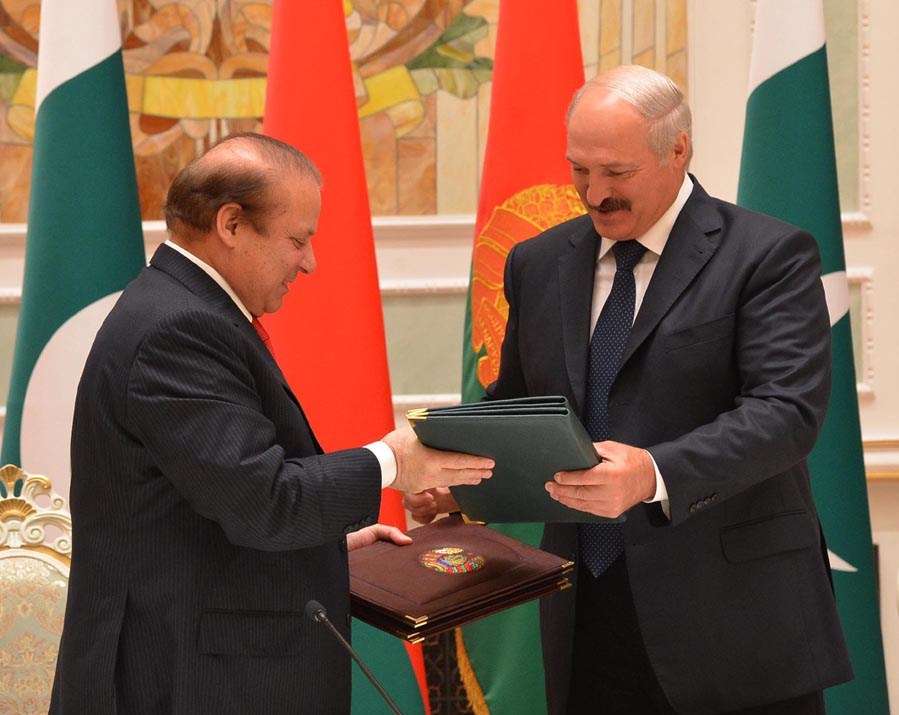 MINSK (92 News) - Pakistan and Belarus on Tuesday agreed to frame a roadmap for long term partnership between the two countries, while signing several Memorandum  of Understandings. The understanding came at a meeting between Prime Minister Nawaz Sharif and Prime Minister of Belarus Andrei Kobyakov. The two leaders also agreed to bolster economic and trade relations. The prime minister of Belarus in his remarks said his country desires strong relations with Pakistan. Meanwhile, Pakistan and Belarus inked a number of agreements to strengthen their multifaceted ties particularly in areas of trade, commerce, education and culture.  The agreements came after following a round of delegation level talks and an exclusive meeting of Prime Minister Nawaz Sharif with President Alexander Lukashenko. Speaking at the occasion, President of Belarus Alexander Lukashenko lauded Pakistan's role and efforts in bringing peace and stability to the world by countering terrorism and offered his country's full support in this fight. "Belarus is ready to jointly fight with Pakistan against extremism, terrorism, illegal trafficking of people, drugs and weapons," he said, while lauding that the Prime Minister Nawaz Sharif for his ability to take quick decisions and said a lot of work had been put in to ensure the success of this visit. Prime Minister Nawaz Sharif termed the talks productive and said the two sides discussed relations in all spheres. "The focus of the talks was on trade, industry, agriculture, investment, culture and education," he said. "Both countries have agreed to work together for the shared objective of peace and prosperity in the region and beyond."