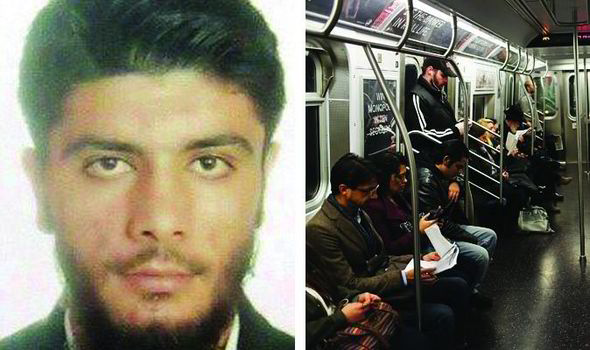 NEW YORK (Reuters) - A Pakistan-born man accused by US authorities of participating in an al Qaeda plot to attack targets in Europe and the United States took the stand in his defence Wednesday, denying any affiliation with the militant group. Abid Naseer, 28, denied engaging in terrorism and said he was not guilty. He described himself to jurors in Brooklyn, New York, as a semi-professional cricket player who came from a "happy childhood." Naseer called himself Islamic and religious. He said the movement he belonged to was non-political and "did not allow any discussion of jihad." "Terrorism is not compatible with Islam," Naseer said. The testimony by Naseer, who has been representing himself at trial, came after federal prosecutors rested in the case. For the first time in US court, they presented documents seized from the May 2011 raid in Abbotabad, Pakistan that killed Osama bin Laden. That raid followed a nearly 10-year hunt after the Sept. 11, 2001, attacks on the United States using hijacked jetliners. The documents were intended to bolster prosecutors' claims that Naseer, as the leader of an al Qaeda cell, engaged in a plot against a shopping centre in Manchester, England in 2009, an attack that ultimately did not happen. The attack was one of three that al Qaeda cells were working on, along with plots against the New York City subway system and a Copenhagen newspaper, prosecutors say. The documents from bin Laden's compound included a letter reporting on plans to send al Qaeda members for attacks in Russia against either a gas pipeline or the US Embassy and in Britain against "several targets." "The brother determines what target suits him in line with what materials he can get," said the letter. It was not immediately clear in court when the letter was sent or by whom. Alexander Otte, an FBI assistant legal attaché, testified earlier Wednesday to being on site at a hangar in Afghanistan early in the morning on May 2 to retrieve the documents from members of the Navy SEALS who carried out the raid. Otte said the raid force turned over weapons, phones and computers, and also showed him bin Laden's body. "I knew who he was," he said. "I recognised him immediately." Naseer is expected to continue testifying Thursday. He faces up to life in prison if convicted of providing and conspiring to provide material support to al Qaeda and conspiring to use a destructive device.