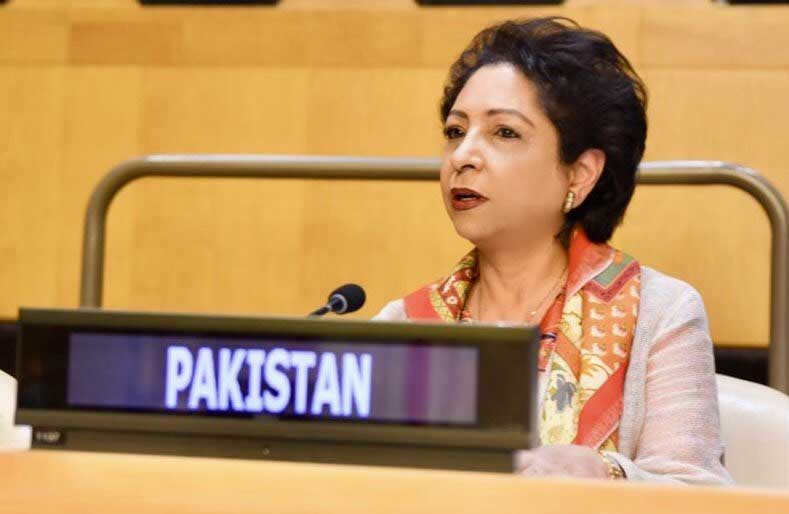 NEW YORK (92 News) – Pakistan has called for new United Nations Strategy and Plan of Action to combat Islamophobia and hate speech. Pakistan’s permanent representative to UN Maleeha Lodhi said this at a special meeting in New York. She said an inevitable consequence is to fan the flames of bigotry, intolerance, anti-Muslim hatred and xenophobia. Maleeha Lodhi said Prime Minister, Imran Khan, has recently called for urgent action to counter Islamophobia, which is today the most prevalent expression of racism and hatred against ‘the other’. On the occasion, UN Secretary-General Antonio Guterres said that the UN Strategy and Plan of Action provides a system-wide programme with the overriding objective of identifying, preventing and confronting hate speech.

Denial of self-determination to Kashmiris violation of UN Charter

Pakistan has told the UN General Assembly that the continued denial of the right to self-determination to the people of Indian-held Jammu Kashmir (IHK) was not only a travesty of justice, but also an “egregious violation” of the UN Charter. Addressing a special meeting of the 193-member Assembly to commemorate the “International Day of Multilateralism and Diplomacy for Peace”, Pakistan’s Ambassador to UN Maleeha Lodhi urged the international community to stand united against any attempts to undermine the sanctity of the UN Charter or to reinterpret its fundamental provisions to suit narrow aims. “If the primacy of ‘we the peoples’ is to be more than just words,” Ambassador Lodhi underscored, the fundamental rights enshrined in the Charter must be ensured to all peoples. She also pointed to a growing tendency in the world by some to erode well-established norms of international law, including respect for sovereignty and the territorial integrity of states, and the prohibition of the use of force.

Warning against unilateralism, the Pakistani envoy said that the only alternative to a rules-based global order was global disorder. In the increasingly interconnected world, international cooperation is imperative, she asserted, underpinned by the core values of mutual respect and tolerance.

Frustration into a rejection of international order

“After all global challenges require global responses and solutions. Across many parts of the world, a conflation of economic distress and nationalistic passions has found refuge in a populist discourse that seeks to turn a widespread sense of resentment and frustration into a rejection of the international order,” Maleeha said. “These doubts needed to be pushed back by a stronger commitment by the international community to multilateralism,” she added.