NEW YORK (92 News) – Foreign Minister Shah Mahmood Qureshi held talks with his Chinese counterpart Wang Yi on the sidelines of UN General Assembly, pledging to make strenuous efforts to take their strategic partnership to new heights. The foreign ministers from both the countries discussed the regional situation and the prevailing strategic environment in South Asia. During the meeting, the two leaders had an in-depth exchange of views on the entire spectrum of bilateral relations including the security issues. 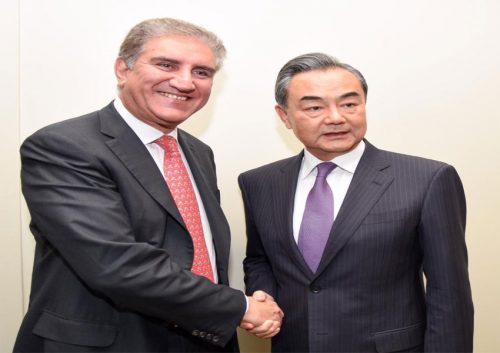 Qureshi emphasized that CPEC would remain a top priority for the government of Pakistan. On the occasion, Chinese Foreign Minister Wang Yi said the Chinese leadership is looking forward to the visit of Prime Minister Imran Khan to China. Meanwhile, the Chinese foreign minister said that any plots to sow discord in ties with Pakistan will not prevail. A statement issued by the Chinese Foreign Ministry in Beijing quoted him as saying that any conspiracies attempting to incite disharmony or interfere in China-Pakistan relations would fail.