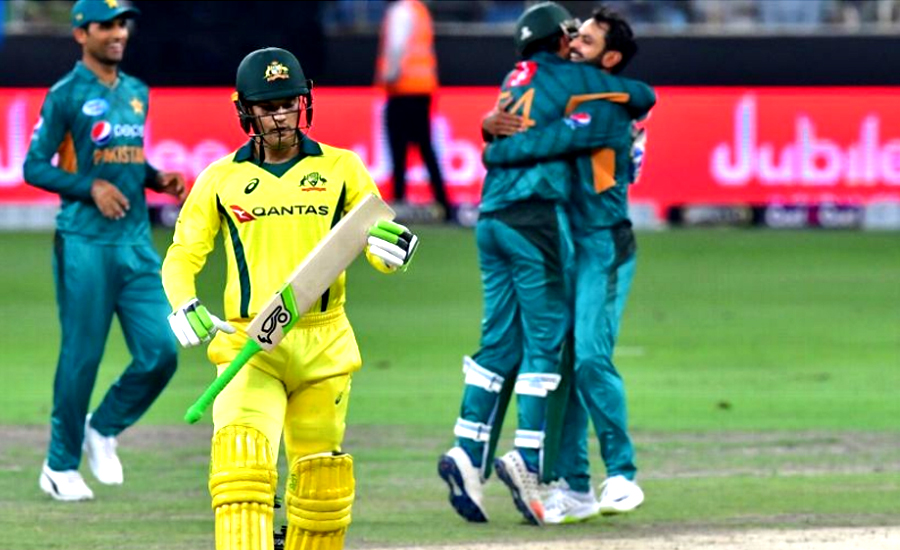 DUBAI (92 News) - Pakistan have beaten Australia by 33 runs in the third and final Twenty20 International to complete their first ever series whitewash against the visitors at Dubai Cricket Stadium on Sunday night. Pakistan made 150-5 in their 20 overs with Babar Azam (50), Sahibzada Farhan (39) and Mohammad Hafeez (32 not out) their main run scorers. In reply Australia were bowled out for 117 in 19.1 overs, with Ben McDermott and Mitchell Marsh scoring 21 each. Spinner Shadab Khan took 3-19. Pakistan won the first match by 66 runs in Abu Dhabi followed by 11 run victory in the second in Dubai. Australia gambled with opening with Alex Carey, a move which seemed like it had paid off after he milked 20 runs off the opening over off Imad Wasim, who was named Man of the Match in the first two T20Is this series. Wasim, who hadn't conceded a single boundary in the last game, had conceded four in his first over. Pakistan, for the first time in the series, found themselves under a bit of pressure as the Australian batsmen found the boundaries regularly, muscling their way through, upfront. With Australia taking on the offspinners, it was up to the legspinner Shadab Khan to pull the breaks on Australia. He struck first ball getting Lynn, who was offered a chance by Hasan Ali when he was put down in the previous over. A slog sweep soon after did him in with Shadab picking up his first of three wickets on the night, finishing with figures of 3 for 19. Ben McDermott's third successive run-out, when he was steadying the innings, didn't do Australia any good. Nor did D'Arcy Short's pull off Usman Khan that was taken beautifully in the deep by Shoaib Malik. Pakistan didn't hold on to all their catches, but the Australian batsmen ensured they didn't give the opposition too much to fret over. With the side being reduced to 106 for 8, and 45 needed from the last three, Australia had left too much for their bowlers to do. Pakistan have set 151-run target for Australia to win triangular T20 cricket series, while Australian team could not chase the target of Pakistan. Pakistan won the toss and elected to bat in the third Twenty20 international against Australia in Abu Dhabi. The Pakistani openers started match magnificently and loss first wicket at 93 runs. Opener right-handed Sahibzada Farhan catch out after getting 39 runs with three sixes and two fours. However, opener Babar Azam got 50 runswith the help of one six and three fours. After that SHoib Malik scored 18 on 12 balls and Asif Ali 4 while Faheem secured 0 and took the way of pavilion. On the other hand, Australia Mitchel Marsh got two, Adem Zampa and Natahn Leon got one wicket. Brief scores: Pakistan 150/5 in 20 overs (Babar Azam 50, Sahibzada Farhan 39, Mohammad Hafeez 32*; Mitchell Marsh 2-6) beat Australia 117 all out in 19.1 overs (Ben McDermott 21, Mitchell Marsh 21; Shadab Khan 3-19) by 33 runs. Squads: Pakistan: Sarfraz Ahmed (captain), Shaheen Shah Afridi, Asif Ali, Hassan Ali, Faheem Ashraf, Babar Azam, Sahibzada Farhan, Mohammad Hafeez, Shadab Khan, Shoaib Malik, Waqas Maqsood, Usman Khan Shinwari, Hussain Talat, Imad Wasim, Fakhar Zaman Australia: Aaron Finch (captain), Mitch Marsh, Alex Carey, Ashton Agar, Nathan Coulter-Nile, Chris Lynn, Nathan Lyon, Glenn Maxwell, Ben McDermott, Darcy Short, Peter Siddle, Billy Stanlake, Mitch Starc, Andrew Tye, Adam Zampa