SRINAGAR (92 News) – Minister of Kashmir Affairs and Gilgit Baltistan Ali Amin Gandapur has condemned martyrdom of eight Kashmiri youth by Indian troops in fresh act off state terrorism in Kulgam district of Indian-held Jammu Kashmir (IHK). In a statement, the minister has drawn the attention of world community towards the worst atrocities of Indian security forces on innocent Kashmiris. He said the world conscience should raise its voice on this barbaric treatment. The minister said Pakistan will continue to expose the true face of India on all international forums. Earlier, in occupied Kashmir, Indian troops in their fresh act of state terrorism martyred nine youth and injured more than fifty in Laroo area of Kulgam district, on Sunday. 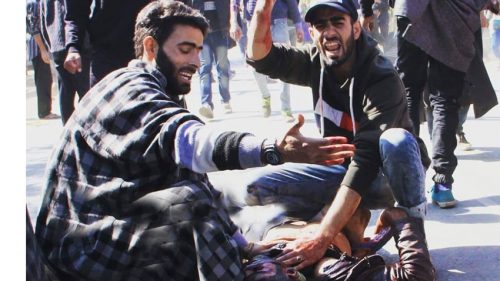 Three of the martyred got killed when the troops blasted a house. The rest were killed in troops' firing and in an explosion while people were removing the debris of the blasted house. The incident followed a cordon and search operation, by the occupation forces in the district. The troops used bullets, pellets and teargas shells against the protesting youth. Doctors at Kulgam and Islamabad district hospitals said that they had received 44 injured youth. Some critically injured were shifted to hospitals in Srinagar. Soon after the killings, the authorities suspended internet services and imposed curfew like restrictions in Kulgam district. Meanwhile, four Indian soldiers were injured in two separate attacks in Kulgam and Pulwama. The Joint Resistance Leadership comprising Syed Ali Gilani, Mirwaiz Umar Farooq and Muhammad Yasin Malik while condemning the killings in a statement issued in Srinagar, today, called for complete shutdown, tomorrow, against the brutal killings in Kulgam. The statement said that a protest sit-in would be held at Lal Chowk in Srinagar on Tuesday. Mirwaiz Umar Farooq on the occasion said that Indian forces had replicated the scenes of Karbala in Kulgam district of southern Kashmir. He said that the killing of so many youth in a single day was sufficient to shake the conscience of the world community.  The Kashmir Economic Alliance in a statement supported the JRL’s call for the strike. Tehreek-e-Hurriyat Jammu and Kashmir Chairman Muhammad Ashraf Sehrai in a statement said that the authorities had given a license to its forces to kill the Kashmiris with impunity. Hurriyat leaders Zafar Akbar Butt and Bilal Sidduqi in their addresses and statements paid tributes to the Kulgam martyrs.