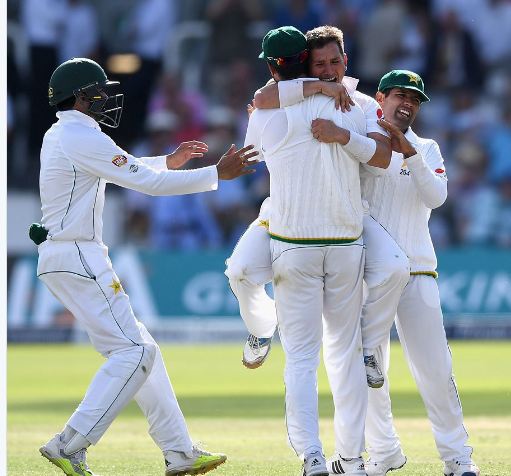 by Adrees Malik The Lord’s Cricket Ground is a dream place for every team and cricketer to play and if you are a part of winning test team at Lord’s than nothing is more auspicious in your career. Pakistan Cricket team creates history at lords when they beat England by 75 runs. The first test match of four match’s series is historical in number of things and performances like Misbah’s 100 as an eldest test captain, Yasir Shah 10 Wickets and Amir back in test cricket after 6 years ban on fixing. The unsung hero of the match was Rahat Ali. Pakistan test team made number of records in lord’s test 14th to July 17, 2016 in which the Eldest test century maker for Misbah, ten wickets in a test match and the most successful Bowler of Asia at Lord’s for Yasir Shah. The Pakistan’s Test captain Misbah Ul Haq (mighty Misbah) is one of the best captains in the world who achieved his dream victory at Lord’s against London on July 17, 2016. The victory was also unique for him because this was the first test of his career in England as player and Captain. Misbah dedicate this marvelous victory to the Abdul Satar Edhi Sb late (the world’s best philanthropist) and said it was need of the time for nation boost and I am thankful to my team for achieving this milestone. Misbah Ul Haq who is un matched now in the test history of Pakistan as winning captain said he is happy enough for making 114 in the first inning and want to participate with same passion in the 2nd inning but “ it’s you favorite short who help you to make 100 and out on zero”. Pakistan who played last test at Lord’s in 2010 which was hilarious in test history when trio Asif, Amir and Salman butt was caught on fixing and now in 2016 the team played best. “ Our team is much better than 2010 and I hope Amir will perform well in coming test matches as we need his performances for Team win” Misbah compared the team Pakistan in 2010 and 2016 and comment on the back of Amir in international test Cricket after 6 years. Pakistan is a team now who won the most matches at lords and Yasir shah become the Asian bowler who got the most wickets at lords. Yasir shah who always face the everybody with smiling face feeling proud at the moment of interview to the expert with his mentor and translator Mushtaq Ahmad. “I was in pressure because of work load and expectations before the match but the experienced guideline from Mushtaq Ahmad (Bowling consultant) and Intikhab Alam (Team manager) helped me to perform and achieve the milestone of my cricketing life and I am thankful to them“ Yasir shah said in post match interview. Yasir shah contributes well with bat in both the innings and aimed to make fifty in the 2nd innings but cannot make it. The Lord’s test match was the match in which Pakistan team out classed the English team in all the departments and now has edge of 1-0 lead in four test match series.