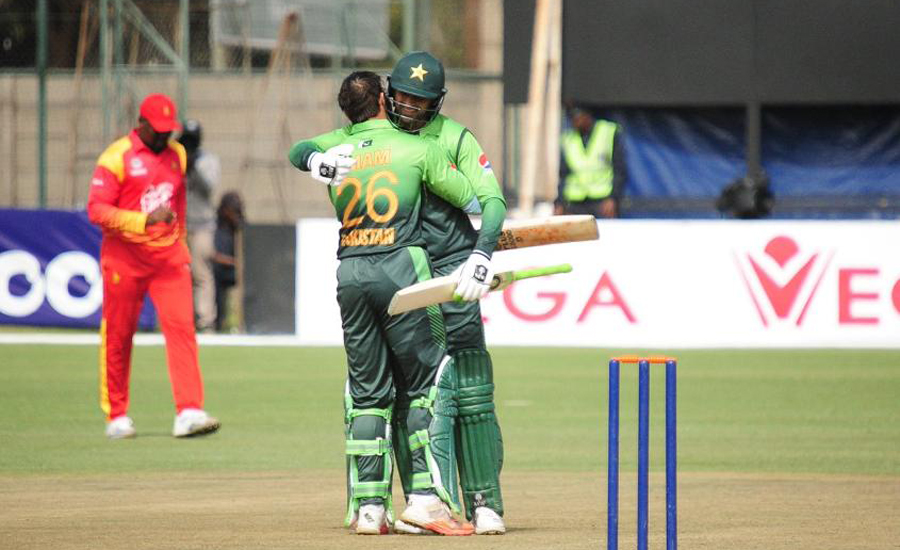 HARARE – A hundred for Imam-ul-Haq and four wickets for Shadab Khan sees Pakistan run out winners by 201 runs. Pakistan continued their fine form in white ball cricket with a crushing win over Zimbabwe in Bulawayo, emerging victorious by 201 runs. Batting first Pakistan made 308/7 with Imam-ul-Haq top-scoring with 128. It was always going to be a stiff target for Zimbabwe and regular wickets kept pegging them back as they were bowled out for 107. Imam combined with Fakhar Zaman in a 113 run opening partnership from 24.2 overs as they took a liking to the Zimbabwe bowling. They were not racing along in terms of run rate, but there was very few alarms as they set a superb platform for their team. The partnership was eventually broken by Liam Roche who had Fakhar caught and bowled for 60 from 70 balls. The century stand for the opening wicket was followed by a partnership of 59 between Imam and Babar Azam who continued the strong start to the innings. Just as it looked as if they would start to accelerate the stand was broken by Wellington Masakadza. The wicket came from nowhere and from a poor ball. A long hop was smashed straight to mid-wicket. There was a need to get things going and that increase in scoring was provided by Asif Ali who raced to 46 from 25 balls in an innings that included four fours and two sixes. But for him Pakistan may have struggled to get past 300. Imam’s innings was ended in the 46th over when he attempted to go big over long on and was well caught by Tarisai Musakanda off the bowling of Blessing Muzarabani. Zimbabwe’s chase got off to the worst possible start as they ended up 11/2 after four overs with Brian Chari and Hamilton Masakadza both gone off the bowling of Usman Khan. There was a recovery of sorts with a partnership 34 between Musakanda and Chamu Chibhabha, the biggest of the Zimbabwe innings. Then three wickets for 10 runs put the brakes on the Zimbawe chase and the home side never recovered as they found themselves 55/5. It was an ODI debutant, Ryan Murray, that held things together for Zimbabwe as he top scored with 32 not out. However none of his team mates managed to stick it out with him as Shadab Khan ripped through the Zimbabwe tail. The leg-spinner started with the wicket of Donald Tripano, bowling him with a googly that completely decided him and smashed into his stumps. He then had Roche, another debutant, caught at mid-on as Zimbabwe slumped to 91/7. He claimed the wickets of Chatara and Muzanbani, both bowled, to round out the Zimbabwe innings and to give himself figures of 4/32 from nine overs. The next fixture in the five match series will take place at the same venue on Monday. Zimbabwe will need a big uplift in performance to challenge for the win. SCOREBOARD