OSLO – Prime Minister Nawaz Sharif has said that Pakistan fully shares the vision of Oslo Summit which aims at mobilizing strong and renewed political commitment to reach out to the 58 million children who are still being denied their right to education and to improve quality of education, reported 92 News. He was talking to former British Prime Minister Gordon Brown in Oslo. The prime minister said that Pakistan government is determined to improve the quality of education, enhance gender equality and provide increased learning opportunities for both male and female students in Pakistan. “I strongly believe that education of youth is the only way forward for socio-economic progress of our future generations and that eradicating illiteracy is essential for promotion of peace, tolerance and harmony in any society,” he said. Nawaz Sharif congratulated Gordon Brown on being a major driving force behind the Oslo Summit. Special Assistant to PM on Foreign Affairs Sartaj Aziz, Tariq Fatemi, State Minister for Education Balighur Rahman and Pakistan's Ambassador to Norway were present in the meeting. Gordon Brown extended condolences on the tragic Army Public School Peshawar incident and appreciated the decisions taken by the government in its aftermath. Foreign Minister of Norway Borge Brende also called on Prime Minister Muhammad Nawaz Sharif in Oslo. Talking to him, the prime minister said that Pakistan and Norway have extended support to each other at various international forums and Pakistan looks forward to continue cooperation in various spheres. Prime Minister Nawaz Sharif also extended condolences on the death of Norwegian Ambassador Leif H Larsen in tragic helicopter crash in Naltar. [caption id="attachment_32547" align="alignnone" width="354"] 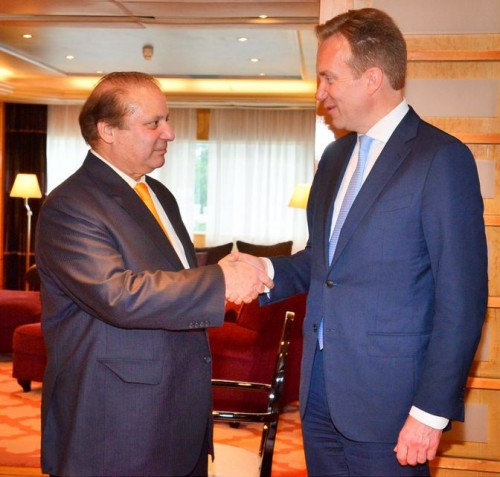