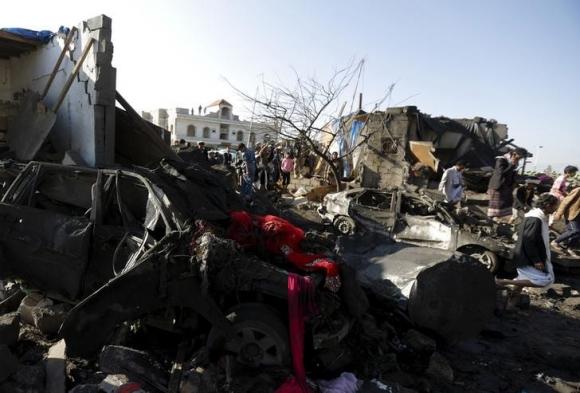 PESHAWAR - Pakistan evacuated about 500 of its nationals by plane from Yemen on Sunday during a brief pause in air strikes by a Saudi-led military coalition against Shi'ite Muslim Houthi forces, a Saudi military spokesman said. Pakistan is a regional ally of Saudi Arabia, the main Sunni Muslim power in the Gulf, but has yet to say whether it will offer military support to Riyadh's campaign in Yemen. Saudi military spokesman Brigadier General Ahmed Asseri said operations around the Red Sea port of Hodeida stopped for more than two hours on Sunday to allow the Pakistani evacuation. "Around 500 Pakistani nationals were evacuated on Pakistani planes after the coalition forces provided a safe passage for them," Asseri told a news conference in Riyadh. "They were evacuated and arrived back in their country." Their departure came a day after Saudi Arabia evacuated dozens of diplomats from Yemen and the United Nations pulled out international staff from the Yemeni capital Sanaa. A Chinese vessel also docked in the southern Yemeni port of Aden on Sunday to transport Chinese diplomats, medical staff and technicians, a port source said. Yemeni fighters loyal to Saudi-backed President Abd-Rabbu Mansour Hadi clashed with Iranian-allied Houthi fighters on Sunday in downtown Aden, the absent leader's last major foothold in the country. Pakistan TV has interviewed distraught nationals trapped in Yemen who complained of nothing being done to rescue them. Defense Minister Khawaja Asif told Pakistan's parliament on Friday the government had made no decision on whether to give military support to the Saudi-led coalition, while pledging to defend Saudi Arabia against any threat. "We have made no decision to participate in this war. We didn't make any promise. We have not promised any military support to the Saudi-led coalition in Yemen," Asif said. Asif told Reuters there was no danger of Pakistan getting caught up in a sectarian war. Pakistan has been plagued by sectarian violence on its own territory for years, with militant Sunni Muslim groups targeting its Shi'ite minority. "So many minorities and sects live in Pakistan," Asif told Reuters. "Whatever assurances we give Saudi Arabia is to defend its territorial integrity, but I assure (you) that there is no danger of us getting involved in a sectarian war." Prime Minister Nawaz Sharif has long enjoyed close relations with the Saudi royal family. After his second term as prime minister was ended by a military coup in 1999, he went into exile in Saudi Arabia. Saudi Arabia last year loaned $1.5 billion to Pakistan to help Islamabad shore up its foreign exchange reserves, meet debt-service obligations and undertake large energy and infrastructure projects. - Reuters