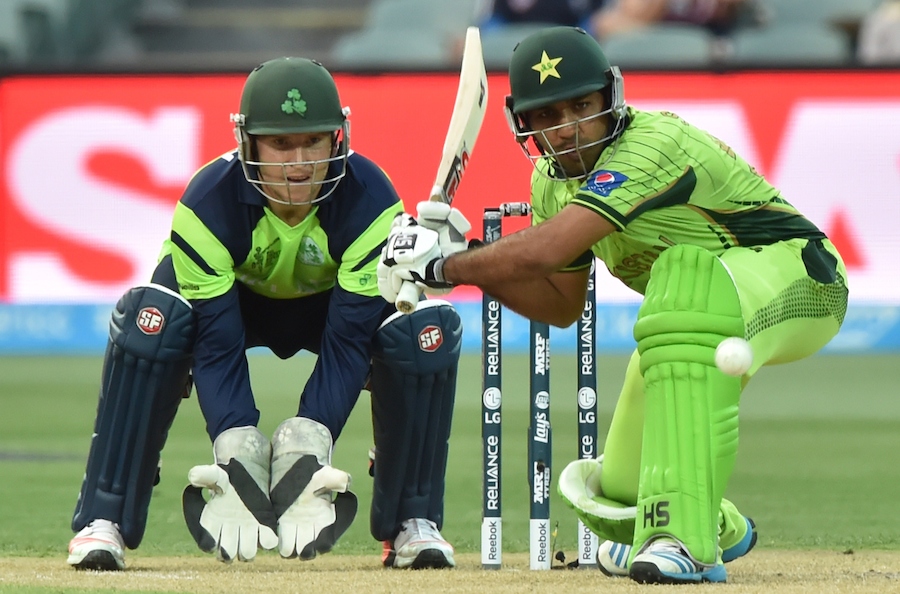 * Porterfield scores 107 in Ireland's 237 all out * Sarfraz hits Pakistan's first ton at this World Cup ADELAIDE - Pakistan grabbed a World Cup quarter-final berth on Sunday following their seven-wicket victory against Ireland that also cleared West Indies' last eight passage from Pool B. Sarfraz Ahmed (101 not out) hit Pakistan's first century at this year's World Cup and added 120 runs with Ahmed Shehzad (63) to give the team their best start in the tournament. The 1992 champions overwhelmed their 238-run victory target with nearly four overs to spare but Ahmed's struggle to get his first ODI century and Umar Akmal's blocking at the other end to help his partner achieve the milestone made it a dull end to the match. Pakistan's chase got off to a slow start with the Irish bowlers maintaining a tight leash and conceding just two boundaries in the first seven overs. It was when George Dockrell was brought into the attack that Ahmed and Shehzad broke loose, hitting two boundaries each in the 10th over of the innings. Shehzad took 52 balls to bring up his fifty and Pakistan reached the 100-mark in the 19th over to put behind the slow start. Ahmed needed 58 balls to reach his fifty and Pakistan seemed to have finally found an answer to their opening woes. Shehzad threw his wicket in the 23rd over and Misbah-ul-Haq fell after contributing 39 but Pakistan's victory was never really in doubt. They will now face tournament co-hosts Australia in the third quarter-final at Adelaide on Friday. Earlier, Ireland captain William Porterfield led by example, hitting his first World Cup century to lift Ireland to 237 contributing nearly half of the team's total. Porterfield's decision to bat was a positive one but Ireland lost wickets each time a partnership appeared to be building. The skipper picked up the length well and backed himself to go for his shots, one such instance had him swivelling to pull Sohail Khan for the first of the two sixes in the Irish innings. Ed Joyce was lucky early in his knock, dropped by a wrong-footed Ahmed Shehzad at point and surviving a strong caught-behind appeal. The 36-year-old could not make the most of his seemingly charmed life, however, and fluffed a pull shot to depart after making 11. Porterfield also needed some luck to bring up his 100. Batting on 94, the left-hander nearly ran himself out at the non-striker's end after abandoning his bid for a non-existent single. His century also came in streaky fashion with Porterfield driving the ball back to bowler Rahat Ali, who could not take the catch on his follow-through. The Ireland skipper eventually fell in the 39th over, Shahid Afridi rushing from the edge of the circle to take a low, diving catch after Porterfield had mistimed a drive off Sohail Khan. - Reuters