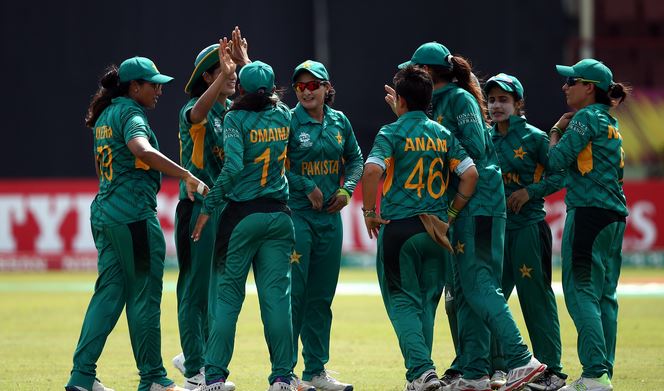 GEORGE TOWN (92 News) -  It's a must-win game for both Pakistan and Ireland as they look to bounce back after early losses in Group B at the ICC Women's WT20 2018.

Pakistan have made an inauspicious start to their WT20 campaign – they lost their opening game to Australia and then went down to India. The game against Ireland, the lowest-ranked of the sides, is therefore a must-win affair for Javeria Khan and Co. as their chances to stay alive in the tournament are diminishing fast. Losing to Ireland will hurt their chances of not just proceeding to the next stage but also qualifying directly for the next edition of the tournament.
The major concern for Pakistan is their batting. Opener Ayesha Zafar has registered scores of 0 and 2 in the two games, while promoting Javeria as Ayesha's partner after Nahida Khan failed at the top against Australia didn't go Pakistan's way either. Finding a reliable opening combination will be key for Pakistan. However, they can take confidence from the performance of Bismah Maroof and Nida Dar, the middle-order batters, who both scored half-centuries against India. Ireland also face a similar problem. In their opening game against Australia, they could only manage 93/6 in 20 overs, which against the No.1 side in the MRF Tyres ICC T20I Team Rankings was never enough. A few of their batters did get starts, though, and Ireland will want some of them, like Care Shillington, Kim Garth, captain Laura Delany, and the Joyce sisters to do more. Key players Nida Dar (Pakistan): The eighth best bowler in the MRF Tyres ICC Women's T20I Player Rankings failed to impress in the first game, but did well with both bat and ball in the second. She hit a blazing 35-ball 52 featuring five fours and two sixes and also returned an economical spell of 1/17. Pakistan will want more of them same against Ireland. Kim Garth (Ireland): She is experienced and knows her role. Garth stood out in Ireland's loss to Australia – she not only top-scored with a 26-ball 24, but also was the only one to pick up a wicket. Ireland will want her to be on top of her game in the coming matches. Conditions The rains have helped ease the Guyana heat a bit. Light showers are expected to play a role during the match hours, though, and the pitch is expected to assist the slower bowlers. But there might be something for the pacers too, given the overcast conditions. Squads Pakistan: Javeria Khan (c), Bismah Maroof, Aiman Anwer, Aliya Riaz, Anam Amin, Ayesha Zafar, Diana Baig, Muneeba Ali, Nahida Khan, Nashra Sandhu, Natalia Pervaiz, Nida Dar, Omaima Sohail, Sana Mir, Sidra Ameen, Sidra Nawaz Ireland: Laura Delaney (c), Kim Garth, Cecelia Joyce, Isobel Joyce, Shauna Kavanagh, Amy Kenealy, Gaby Lewis, Lara Maritz, Ciara Metcalfe, Lucy O’Reilly, Celeste Raack, Eimear Richardson, Clare Shillington, Rebecca Stokell, Mary Waldron