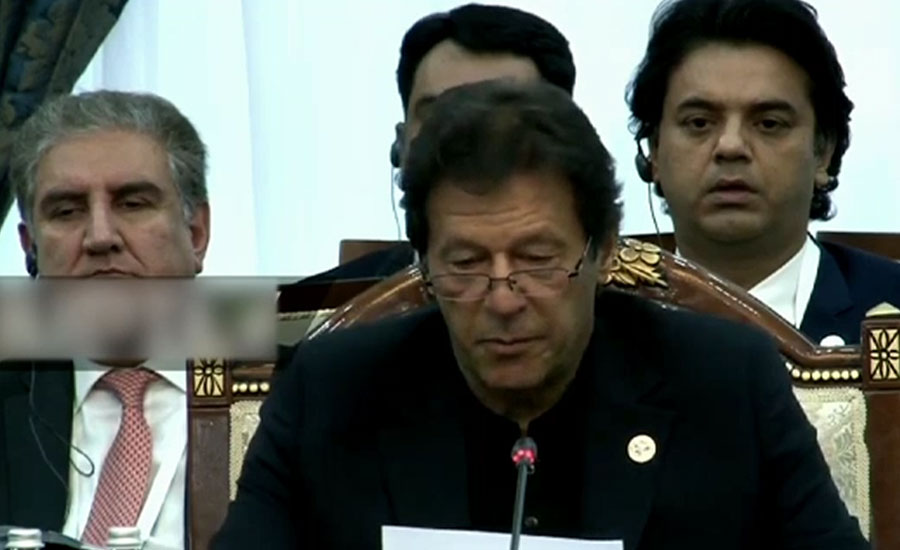 BISHKEK (92 News) – Prime Minister Imran Khan has said that Pakistan is an attractive destination for the investors and a large market endowed with a rich array of resources. Addressing 19th Meeting of the Council of the Heads of State of the Shanghai Cooperation Organisation (SCO) summit on Friday, the prime minster said the predominantly young population of Pakistan is imbued with immense energy and creativity. “Our other endowments include a vast pool of skilled human resource, a large agrarian base, tremendous tourism potential, diverse mineral wealth, and a developed IT infrastructure,” he said. He said Pakistan builts its partnerships based on mutual respect, sovereign equality and equal benefit.

Imran said the China-Pakistan Economic Corridor (CPEC), which he noted was the flagship project of President Xi’s far-sighted Belt and Road Initiative, is fast reaching fruition. “Gwadar Port, at its southern end, marks the only point of convergence of the maritime Belt and the overland Road.” The premier shared that he had visited China in April for the second Belt and Road Forum. “In time, CPEC is destined to catalyze the creation of an integrated pan-Asian sphere of shared prosperity,” he said. Prime Minister Khan said that the world was seeing the advent of a multi-polar global order for the first time in ages.

Threats from terrorism to climate change

The premier said that there were threats from terrorism to climate change to narcotics to bacterial resistance. Additionally, he said there were increasing barriers to open trade and innovation as well as growing intolerance and Islamaphobia, which were "threatening to accentuate religious fault-lines".

Pakistan condemns terrorism in all its forms, manifestations

The premier said that enduring peace and prosperity in South Asia will remain elusive until the main dynamic in South Asia is shifted from confrontation to cooperation. He said South Asia continues to be challenged by common enemies, including poverty, illiteracy, disease and under-development.  He said political differences and unresolved disputes further compound the predicament. “It is important to seize the opportunities for peaceful resolution of outstanding disputes and collective endeavours for regional prosperity,” Imran Khan said. He said Pakistan condemns terrorism in all its forms and manifestations, including State-terrorism against people under illegal occupation. He said we are among the few countries to have successfully turned the tide against terrorism. He said Pakistan remains ready to share its experience and expertise in counter terrorism. “We will also remain actively engaged in SCO's counter-terrorism initiatives,” he added.

Afghanistan has no military solution

Commenting on the Afghan issue, the prime minister said there is finally a realization that the conflict in Afghanistan has no military solution. He said Pakistan is fully supporting efforts for peace and reconciliation, through an Afghan-led and Afghan-owned process. “We deem this to be part of a shared responsibility and, therefore, appreciate the positive contributions being made by China, Russia and Afghanistan’s immediate neighbours,” he said. He said SCO’s support for post-conflict Afghanistan will remain crucial. https://www.youtube.com/watch?v=OsNHiG5NRBg