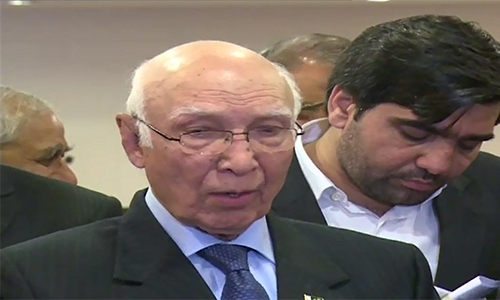 KUALA LUMPUR – Adviser to the Prime Minister on National Security and Foreign Affairs Sartaj Aziz said that Pakistan is pursuing a policy of good-neighbourly relations, 92 News reported. Addressing the 22nd ASEAN Regional Forum Ministerial Meeting held in Kuala Lumpur, Malaysia, he said that Pakistan believes in an Afghan-led and Afghan-owned peace process. “Being a sincere friend and good neighbour of Afghanistan, Pakistan hosted a meeting between the representatives of the Afghan government and Tehreek-e-Taliban Afghanistan, which was a major breakthrough,” he said. The adviser expressed hope that the two sides will seize this historic opportunity and would continue to engage in dialogue for peace and stability in Afghanistan. He recalled the recent meeting of the Prime Ministers of Pakistan and India on the sidelines of the SCO Summit in Ufa in which both leaders agreed that India and Pakistan had a collective responsibility to ensure peace and promote development. The adviser said that Pakistan wants a constructive, sustained, unconditional and result-oriented dialogue with India on all issues of mutual concern including the core issue of Kashmir. He mentioned that after 9 /11 Pakistan had suffered heavily due to growing menace of extremism and terrorism. “The Pakistan government has undertaken Operation Zarb-e-Azb since June 2014 to combat terrorism of all types.” The adviser expressed deep concern at the increasing threats to regional peace and stability in the Middle East. He said the ongoing conflicts in lraq, Syria, Yemen and the emergence of Islamic State are worrisome. “Pakistan unequivocally condemns terrorism committed by ISIL against States and individuals.” The adviser expressed serious concern over an unprecedented rise in the number of migrants leaving their countries, in a bid to escape persecution and economic deprivation at home. The adviser urged the international community not to shy away from its responsibility in ensuring that minorities and refugees are treated not only justly and fairly, but generously. He emphasized that fundamental rights of migrants should be protected and safeguarded to the fullest extent and the world community need to address the root causes of the problem in order to find a durable and long-lasting solution. Sartaj Aziz availed this opportunity to emphasize Pakistan's keen desire to build deeper trade and economic linkages with South East Asian countries and the ASEAN. He requested all members of ASEAN to support Pakistan's case for full dialogue partnership. On the sidelines of ARF Ministerial Meeting, the adviser held bilateral meetings with the foreign ministers of China, Turkey, Japan, lndonesia, Malaysia, DPR Korea and Norway in which he held wide-ranging discussions including the issues of peace and security in the Asia Pacific region and ways and means to tackle traditional and non-traditional security challenges.