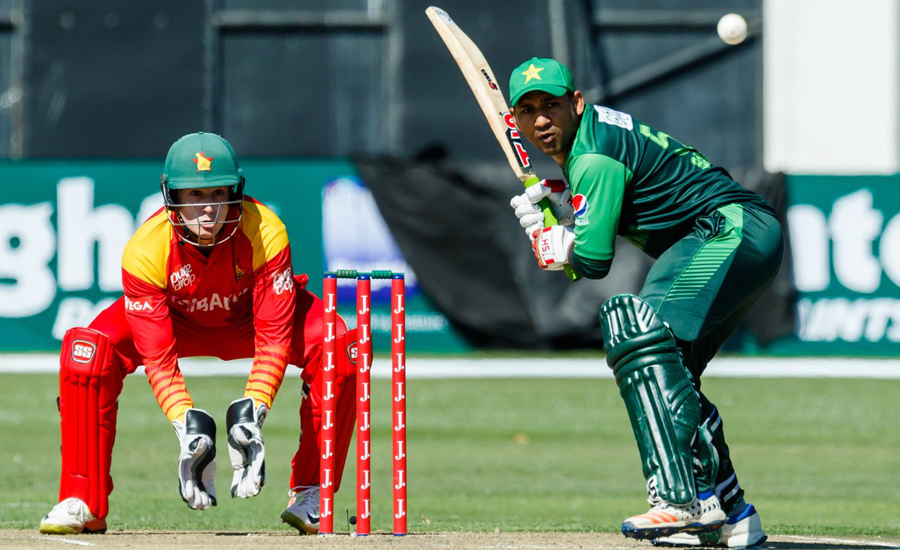 HARARE – Crucial runs from Fakhar Zaman, Hussain Talat, Sarfraz Ahmed and Shoaib Malik help Pakistan win their second game of the triangular series. Zimbabwe looked like they had left the Aaron Finch experience behind them, but a spirited effort led by Solomon Mire was still not enough to beat Pakistan in the fourth game of the triangular Twenty20 International series in Harare on Wednesday. Mire smashed a Zimbabwe record 94 in just 63 balls to lead Zimbabwe to 162/4 – perhaps 10 runs below par – but Pakistan rode on 40s from Fakhar Zaman and Hussain Talat and good contributions from Sarfraz Ahmed, their captain, and Shoaib Malik to knock off the runs. The seven-wicket defeat knocked Zimbabwe out of the tournament. Pakistan asked Zimbabwe to bat, but it seemed like the wrong call as Mire and Cephas Zhuwao, both capable of some big and hard hitting, were solid for the first few overs. Zhuwao exploded at the start, hitting a six and a four in the first over of the innings, bowled by Malik, but then slowed down a bit. He targeted Hasan Ali, taking the paceman for two fours in the third over, but played a lot of dot balls too before becoming the first man out for a 26-ball 24, Faheem Ashraf hitting his stumps. Hamilton Masakadza, the captain, came and went, bowled by Shadab Khan, but Mire was in his element by then. He targeted the Pakistan spinners for special treatment, going high and long often, and brought up his half-century off just 32 balls with one of his six sixes. There was one important partnership too, between Mire and Tarisai Musakanda, who had looked good in scoring 43 in the first fixture against Pakistan too. The two added 64 in quick time for the third wicket, but Mire, who topped Masakadza’s 93* from 2016 to get the highest individual score by a Zimbabwean in T20I cricket during the course of his innings, couldn’t carry on, sending a muscular pull off Talat to Shadab at deep mid-wicket to walk back for 94. When Mire fell, Zimbabwe were on 146/3, and with 10 balls left, should have scored close to 170. That didn’t happen, though. Mohammad Amir, bowling the last over, sent back Musakanda for a 22-ball 33, and Zimbabwe stopped at 162/4. Pakistan got off to an even better start, Zaman and Haris Sohail putting up 58 in just over six overs before Wellington Masakadza got Sohail to hole out at long-on, the catch taken by Mire, to send the batsman back for a 15-ball 16. Zaman and Talat, however, kept up the good work. Zaman looked on course for his second half-century of the tournament after the 61 in the first game against Zimbabwe, but fell against the run of play as Mire – who seemed to be everywhere, doing it all – got the batsman to miscue one to Chris Mpofu at mid-off. It wasn’t one of Zaman’s best innings, but his 38-ball 47 still went a long way in helping Pakistan’s cause. Zaman went with the scoreboard reading 95/2 in 11.4 overs, and it took till the second ball of the 18th for Zimbabwe to strike again when Mpofu got rid of Talat for 44 in 35 balls, caught by Zhuwao at backward point. To be fair to the home side, they did manage to keep the scoring in check, but Talat and Ahmed still managed to add 43 runs together before Talat fell with Pakistan 25 away from victory with 16 balls in hand. Malik, however, was in the mood, and took 11 runs from Mpofu in the four balls left in the 18th over to take Pakistan within 14 runs of victory, and that was achieved without much fuss with five balls in hand. Ahmed ended the game on 38*, while Malik had 12*. Zimbabwe have now lost all their three games, while Australia have won both their games and Pakistan have two wins out of three. The next game will pit Australia and Pakistan against each other at the same venue on Thursday. SCOREBOARD