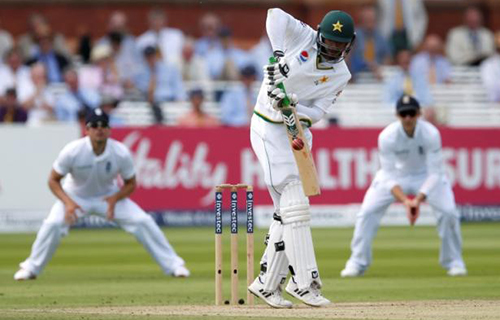 LONDON – Pakistan's Yasir Shah took six wickets to dismiss England for 272 and hand Pakistan a first-innings lead of 67 on the third day of the first test at Lord's on Saturday. Yasir's leg spin outfoxed the hosts and his figures of 6-72 were the best recorded by a visiting spinner against England at Lord's since Sid Pegler's 7-65 for South Africa 104 years ago. England lost their last three wickets for 12 runs on a slow pitch and added only 19 in total on Saturday morning, leaving the tourists with the chance to take a decent lead. England resumed on 253 for seven with Chris Woakes unbeaten on 31 and Stuart Broad on 11 and were 86 runs shy of Pakistan's first-innings total after the tourists were dismissed for 339. Broad only managed to add six runs to his total, however, before he fell to a full inswinger from Wahab Riaz. The 30-year-old Yasir then trapped Steve Finn leg before for five and, with no reviews left, he had no choice but to walk. Debutant Jake Ball was run out by Shan Masood as he looked for a second run to keep Woakes (35) on strike but was short by some distance as Pakistan wrapped up the England tail. Ball had sliced his second ball behind square leg with an outside edge to record his first four test runs. –Reu