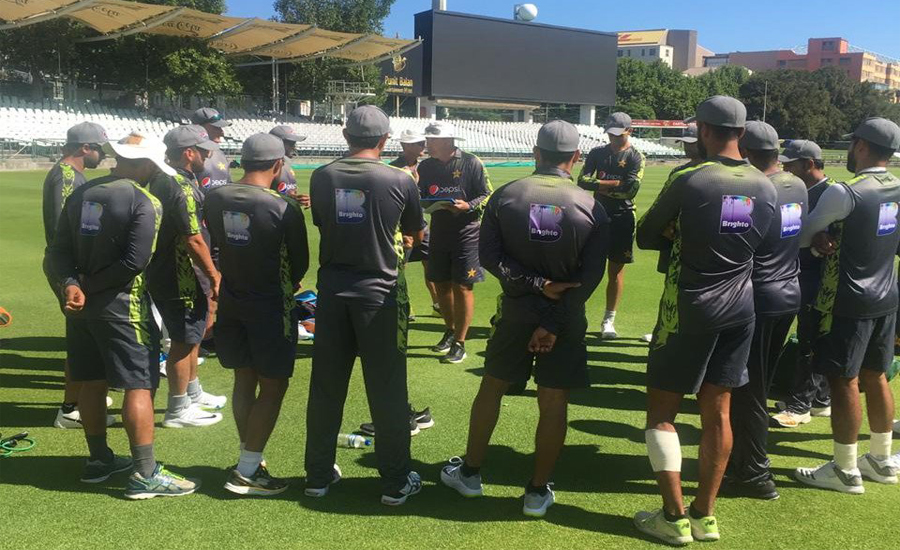 JOHANNESBURG (Web Desk) – Pakistan's inconsistent batting line-up will have to step up if they are to challenge the hosts South Africa in the third and final Test in Johannesburg on Friday. As is expected of them in home conditions, South Africa have been clinical in going 2-0 up against Pakistan. The batsmen struggled a bit in the first Test but pulled things together fantastically in the second game. The only trouble for them going into the final game is that Faf du Plessis, captain and centurion in the previous game, will miss out: he has been suspended for one Test for maintaining a slow over rate. Opener Dean Elgar, 31, will take over the reins and it will be interesting to see how he fares as leader. The uncapped Zubayr Hamza is likely to fill in for du Plessis in the middle-order. The 23-year-old averages a nick under 50 in first-class cricket, and he would like to make a mark in what could be his opening game. There is also an injury concern with Aiden Markram. Pakistan's bowlers, who were exceptional in the first Test but fizzled out a bit in the second, will need to perform at their best. They will look to exploit the void left by du Plessis after he batted them out with a sublime 103 in Cape Town. But it isn't Pakistan's bowling that is the biggest concern. Their batsmen have looked out of their depth against potentially the best Test bowling attack on the most seam-friendly wickets. They've passed 200 just once in their four completed innings. There have been contributions from the likes of Shan Masood and Babar Azam. In fact, those two are leading the run-scoring charts from either side with two fifties each. But it's the failure of the line-up to pull together and post partnerships that has cost them. As a collective, they did show some positive signs in the second innings of the second Test, with all of Masood, Azam and Asad Shafiq scoring fifties to prop Pakistan up to 294. They must look to repeat and even better that performance in the third Test. It most certainly won't be easy, not against an attack featuring Dale Steyn, Kagiso Rabada, Duanne Olivier and Vernon Philander. The Wanderers pitch is most likely to be conducive to pace bowling but whether South Africa persist with four seamers or get in Keshav Maharaj as a spin option remains to be seen. Key players Dean Elgar (South Africa): The opening batsman is known for his steely resolve and determination with the bat which enables him to accumulate tough runs on vicious wickets. He will want to adopt those very qualities into his captaincy. He's captained South Africa just once before, falling to a big defeat against England in 2017. He will want to make amends this time. In absence of du Plessis, his role with the bat at the top of the order becomes that much more crucial as well. Asad Shafiq (Pakistan): Babar Azam and Shan Masood have been great with the bat, but it was only when Asad Shafiq too stepped up to the party that the visitors were able to post a respectable total. The experienced batsman has all the makings of a solid Test player but has fallen prey to inconsistency. If he can dig deep and produce a big score again, it will go a long way in Pakistan's quest to stave off a whitewash. Conditions The weather at Johannesburg should be pleasant for most part although there are a few thunderstorms on the radar. As for the pitch, it's expected to be a sporting wicket with support for seamers while also affording batsmen opportunities to dig in and score runs. Squads Pakistan: Imam-ul-Haq, Fakhar Zaman, Azhar Ali, Shan Masood, Haris Sohail, Asad Shafiq, Babar Azam, Sarfraz Ahmed (c), Mohammad Rizwan, Yasir Shah, Shadab Khan, Mohammad Abbas, Hasan Ali, Mohammad Amir, Faheem Ashraf, Shaheen Afridi South Africa: Dean Elgar (c), Hashim Amla, Temba Bavuma, Theunis de Bruyn, Quinton de Kock, Zubayr Hamza, Keshav Maharaj, Aiden Markram, Duanne Olivier, Kagiso Rabada, Dale Steyn, Dane Paterson, Vernon Philander.