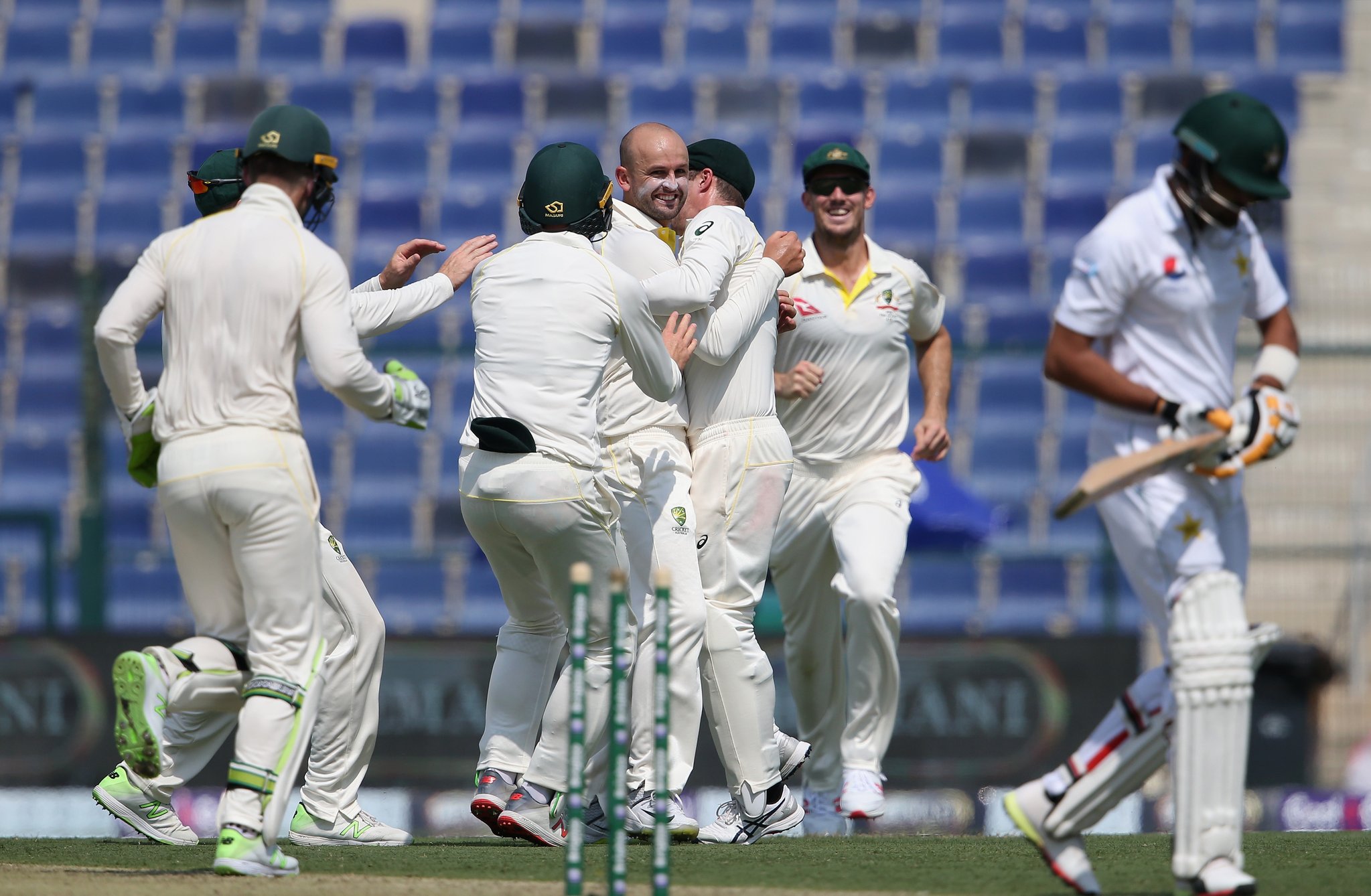 ABU DHABI (92 News) – Pakistan on Tuesday lost six wickets for 204 runs in second Test against Australia in the morning session. Australian bowler Nathan Lyon took four wickets in six delivers. Mohammad Hafeez was the first to return to the pavilion as Mitchell Starc removed him for four. Azhar Ali was next to go after scoring 15 runs. He was followed by Haris Sohail, Asad Shafiq and Babar Azam who returned to the dressing room without adding any runs to the scoreboard. Earlier, Pakistan skipper Sarfraz Ahmed won the toss and elected to bat in the second and final Test against Australia in Abu Dhabi. Australia kept the same side which drew the first Test in Dubai last week. After reducing Australia to 136/3 in pursuit of a 461-run target, Pakistan were best placed for victory at the Dubai International Cricket Stadium in the first Test. Australia scripted a strong fightback on the final day, however, finishing at 363/8 to hold the hosts to a thrilling draw. While Ahmed was disappointed at not crossing the finish line, he didn't think that would affect his side going into the second and final Test of the series. Pakistan skipper Sarfraz Ahmed is confident ahead of the second Test against Australia and says he is proud of how his team showed fight in Dubai. “We have a good opportunity to perform well in this Test match and win the series,” says Ahmed. “As a captain, I am confident of winning this Test match. I am proud how my team responded in the first match,” Ahmed said ahead of the second Test, which begins in Abu Dhabi on Tuesday, 16 October. On the other hand, Australian skipper Tim Paine vowed his team would do its utmost to win the second Test against Pakistan starting in Abu Dhabi from Tuesday for a first series win in Asia since 2011. “We want to win every series we are involved in,” Paine said Monday. “We are focusing on what we do and if we can do well for five days then we have a really good chance of winning it.” Two changes have been come in Pakistani team after opener Imamul Haq fractured his finger in Dubai. He will be replaced by Fakhar Zaman for his first Test. They also left out fast bowler Wahab Riaz, who went wicketless in the first Test, and will pick one from uncapped pacer Mir Hamza or leg-spinner Shadab Khan. Teams Australia: Tim Paine (capt), Ashton Agar, Brendan Doggett, Aaron Finch, Travis Head, Jon Holland, Usman Khawaja, Marnus Labuschagne, Nathan Lyon, Mitchell Marsh, Shaun Marsh, Michael Neser, Matthew Renshaw, Peter Siddle, Mitchell Starc Pakistan: Sarfraz Ahmed (capt), Azhar Ali, Mohammad Hafeez, Fakhar Zaman, Babar Azam, Asad Shafiq, Haris Sohail,Yasir Shah, Shadab Khan, Bilal Asif, Mohammad Abbas, Mir Hamza Umpires: Sundaram Ravi (IND) and Richard illingworth (ENG) TV umpire: Richard Kettleborough(ENG) Match referee: Ranjan Madugalle (SRI)