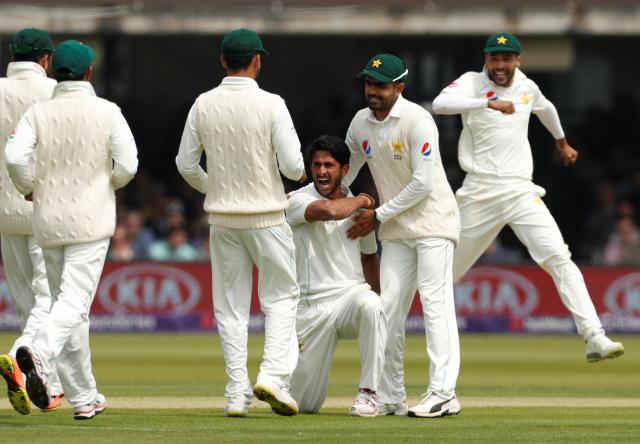 LONDON (Reuters) - Pakistan dominated the first day of the opening Test after bowling out England for 184 and battling to 50 for one in overcast conditions at Lord’s on Thursday. England captain Joe Root won the toss but apart from a gritty 70 by Alastair Cook, his batsmen failed to show the necessary application as Mohammad Abbas and Hasan Ali took four wickets each with disciplined seam bowling. England failed to make the positive start they wanted following their heavy Ashes defeat in Australia and a rare series loss in New Zealand. Mark Stoneman’s unconvincing international career continued when he was bowled by Abbas for four, beaten as he tried to drive a full-length delivery which clipped the top of his off stump. Root, who could have been run out before he had scored, played carefully to get to four before driving rashly at a wide ball from Hasan to nick a catch to wicketkeeper Sarfraz Ahmed. Dawid Malan was also caught by Sarfraz off Hasan for six to leave England struggling at 43 for three. Cook and Jonny Bairstow dug in with a partnership of 57 before Bairstow was bowled for 27 by Faheem Ashraf. Cook, playing in a record-equalling 153rd consecutive Test, was bowled by an excellent delivery from Mohammad Amir to end an innings lasting over three hours. Ben Stokes unfurled a few trademark attacking strokes in his 38 but he was trapped lbw by Abbas following a review and England’s last five wickets crumbled for the addition of 16 runs straight after tea. Jos Buttler, on 14, edged Hasan to second slip where Asad Shafiq took a sharp catch . Dom Bess, making his debut, scored five before giving Shafiq another catch off Abbas, Stuart Broad was lbw to Abbas for nought and Mark Wood was caught by a diving Amir at mid-on for seven. England needed early wickets and Broad snared Pakistan opener Imam-ul-Haq lbw for four, but the hosts failed to make another breakthrough under the floodlights. Azhar Ali (18 not out) and Haris Sohail (21 not out) were largely untroubled by the England fast bowlers, although Azhar was dropped in the slips on 16 by Stokes off Wood to complete a poor day for Root’s side at the start of the two-match series. “We had a plan because the pitch was fresh and had moisture so it was to bowl full and straight,” Hasan said. “There was no need for bouncers because we were getting a lot of help from the pitch.”