PESHAWAR (92 News) – The Pakistan Motor Rally 2017 being organised by Pakistan Army which started on October 21 from Khunjrab reached South Waziristan Agency on completion of its second segment. General Qamar Javed Bajwa, Chief of Army Staff along with Governor KP Engineer Iqbal Zafar Jhagra witnessed the rally and distributed prizes to the best racers of the second segment. 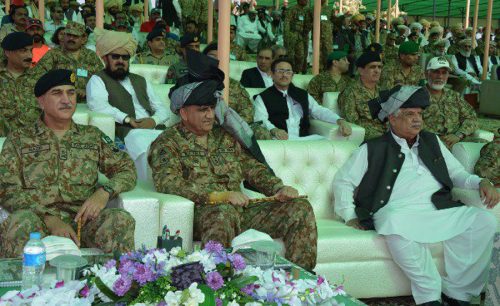 The COAS appreciated spirit of all participants and organizers to promote peaceful and soft image of Pakistan. “Holding of such events in areas once affected by terrorism speak for results of our national sacrifices and efforts to bring back peace and normalcy. Such like events will promote adventure sports, show case tourism potential and cultural heritage of the country,” COAS remarked. Pakistan Motor Rally 2017 is planned in four segments with more than 300 jeeps, 500 bikes and 150 vintage cars drawn from 23 motor clubs. The Motor Rally kicked off from Khunjrab on October 21 passing through Gilgit, Islamabad, South Waziristan Agency, Quetta and Karachi will culminate at Gawadar on Oct 31 covering more than 3000 Kms distance on routes/ areas which are relatively less explored and less developed. A large gathering of local population and civil / military officials were present on the occasion to witness this mega event.