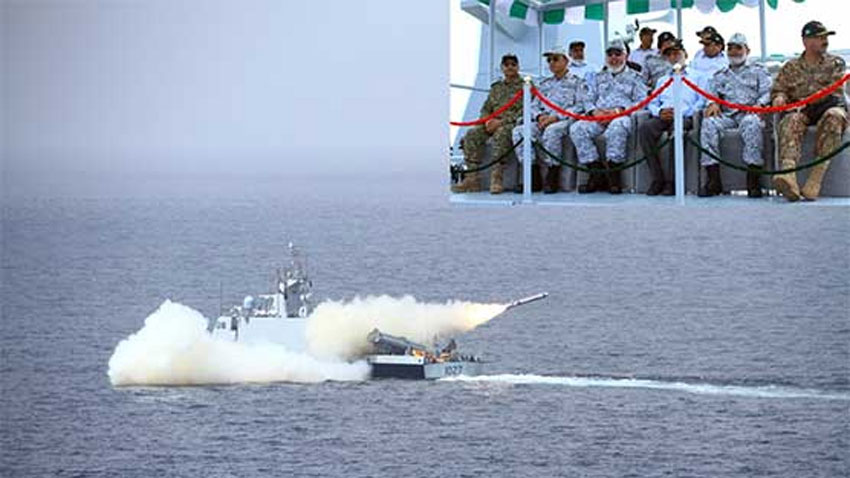 KARACHI (92 News) – Pakistan Navy today successfully test fired an indigenous Cruise Missile in the North Arabian Sea. According to a spokesman of Pakistan Navy, Vice Chief of the Naval Staff Admiral Kaleem Shaukat witnessed the live firing onboard Pakistan Navy Ship. The spokesman said the Live Weapon Firing was conducted by Pakistan Navy's Fast Attack Craft. He also said the indigenously developed Cruise Missile has anti-ship missile and Land Attack capability. The Pakistan Navy spokesman said that the missile accurately hit its target on land signifying the impressive capabilities of the indigenous missile System. He said this is a clear manifestation of Government's resolve to achieve self-reliance in this field. Speaking on this occasion, the naval staff vice chief expressed his utmost satisfaction on the operational readiness of Pakistan Navy Fleet and commended the efforts of all those involved in achieving this significant milestone. He also reaffirmed the resolve of Pakistan Navy to ensure seaward defence and safeguard national maritime interests at all costs.

Earlier on Thursday,  Pakistan Navy took over the command of Combined Maritime Task Force-150 (CTF-150) for the 11th time from Royal Canadian Navy at an impressive change of command ceremony held at Headquarters US NAVCENT, Bahrain. According to the Navy’s spokesperson, Commodore Alveer Ahmed Noor of Pakistan Navy took over the command of CTF-150 from Commodore Darren Garnier of Royal Canadian Navy. Addressing the ceremony, Commodore Alveer Ahmed Noor assured that his team was fully geared up to shoulder this prestigious responsibility. According to the Navy’s spokesperson, Noor said that relations between Pakistan Navy and coalition navies were time tested and were being continuously strengthened due to their focused commitments in support of collaborative maritime security in the region. On the occasion, Commodore Alveer Ahmed Noor said, “Pakistan Navy have the distinction of commanding TF-150 for 10 different times prior to present command which is manifestation of the trust and respect reposed in Pakistan Navy by the coalition partners.”