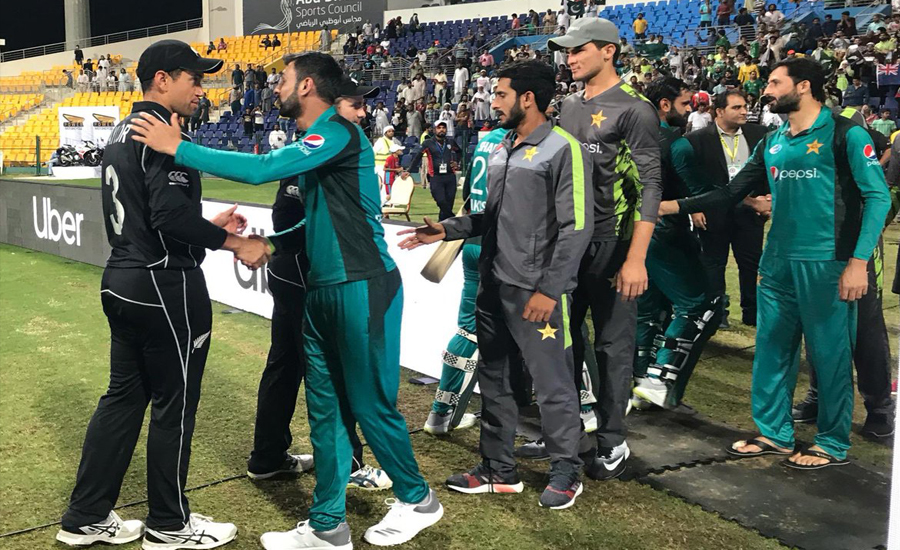 DUBAI (Web Desk) – With the series tied 1-1, Pakistan and New Zealand will go full throttle in the third and final ODI at Dubai International Cricket Stadium, Dubai on Sunday. Pakistan, who snapped a 12-match losing streak in ODIs against New Zealand with a six-wicket win in Abu Dhabi, will want to continue their dominant run in the UAE. Sarfraz Ahmed and his team have won three consecutive series in their adopted fortress, including a Test series against Australia and back-to-back T20 triumphs against Australia and New Zealand. Opener Fakhar Zaman, who has scored 88 in the previous ODI against the Black Caps, is in fine form at the moment. He has the support of his skipper and Imad Wasim, both of whom have delivered promising performances with the willow. Meanwhile, teenaged Shaheen Afridi has taken charge of the bowling department, continuing to impress in his still-nascent international career. The pacer, who has claimed eight scalps in the two games, was adjudged Player of the Match for returning figures of 4/38 in second ODI. Shadab Khan, with six wickets of his own, has played the perfect second fiddle to Afridi's brilliance. New Zealand, on the other hand, have relied heavily on Ross Taylor. The right-hander has scored 80 and 86* in the series so far, bringing his experience into play in the tough batting conditions in the UAE. However, he has not had a lot of support from other Black Caps batsmen. Tom Latham, with his 68 in the first match, has been the only visiting batsman to score a half-century in the series so far. Experienced campaigners like Kane Williamson and Colin Munro have not brought their best to the fore yet. While Trent Boult has looked sharp so far, leg-spinner Ish Sodhi has been unable to exploit the spin-friendly conditions in the UAE. Williamson might consider roping in left-arm orthodox bowler Ajaz Patel in place of Sodhi for the decider. Key Players Ross Taylor: With 7433 ODI runs at an average of 47.04, Taylor has had a stellar international career. He is in a rich vein of form right now and might be the key to New Zealand performance in Dubai. Shaheen Afridi: Afridi, who continues to rise meteorically as a premium pace bowler for Pakistan, has been the chief tormentor of New Zealand's top order this series. If he continues to hit the deck with pace and accuracy, it will be very difficult for the visitors to find a way around him in the final game. Conditions The weather conditions in Dubai will be bright and sunny at the time of the toss with no threat of rain throughout the game. The pitch is likely be dry and slow, which are factors conducive to spin bowling. Squads Pakistan: Sarfraz Ahmed (c), Fakhar Zaman, Mohammad Hafeez, Imam-ul-Haq, Babar Azam, Shoaib Malik, Asif Ali, Haris Sohail, Shadab Khan, Imad Wasim, Faheem Ashraf, Hasan Ali, Junaid Khan, Shaheen Afridi, Usman Khan New Zealand: Kane Williamson(c), Todd Astle, Trent Boult, Colin de Grandhomme, Matt Henry, Tom Latham, Colin Munro, Henry Nicholls, Ish Sodhi, Tim Southee, Ross Taylor, BJ Watling, Lockie Ferguson, Ajaz Patel, George Worker.