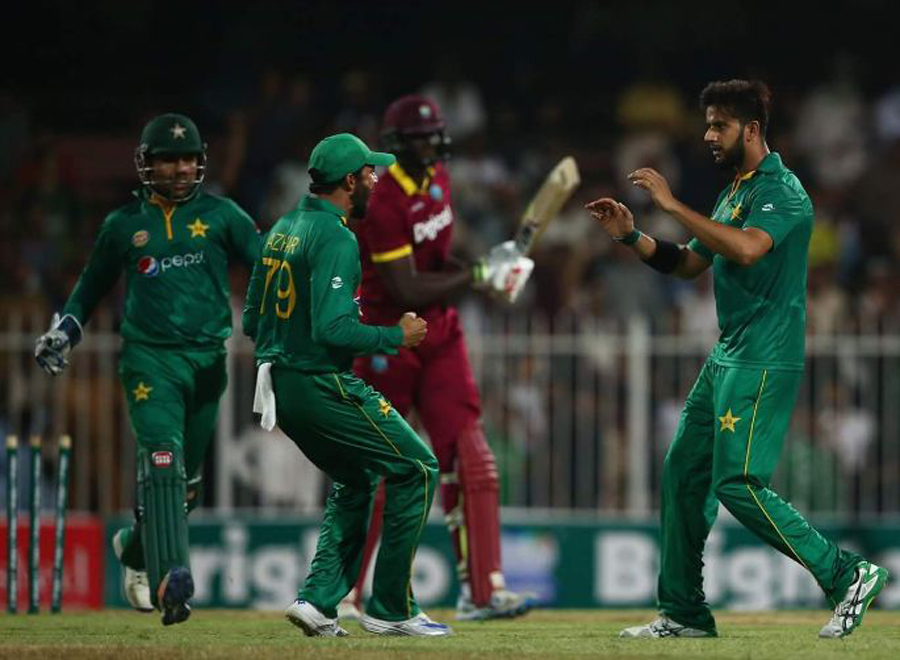 SHARJAH (92 News) – Pakistan kept up the winning habit, following up a 3-0 sweep against West Indies in the Twenty20 International series with a 111-run win via Duckworth/Lewis in the first One-Day International on Friday in Sharjah. The biggest takeaway, however, was that it was the youngsters who played the starring roles -- Babar Azam (120 off 139 balls), 21, set it up with a maiden ODI century before Mohammad Nawaz, 22, picked up 4 for 42. West Indies won the toss and opted to bowl, but Babar's composed innings helped the home side reach 284 for 9 in a 49-overs-a-side game, after a floodlight failure caused a 70-minute delay. With D/L rules applied, West Indies needed 287 to win, but it proved to be too stiff of an ask with Pakistan bowling with great discipline. The visiting side was circumspect at the start and in the seventh over, Mohammad Amir provided the breakthrough, having Johnson Charles edging behind. Kraigg Brathwaite was making his ODI debut, having played 31 Tests, and was tied down by the bowlers before he was out for 14, nicking to the wicketkeeper too. When Darren Bravo fell a few overs later, West Indies had slipped to 54 for 3 after 17 overs. With Marlon Samuels holding up one end, West Indies needed someone else to stick around, but none of the other batsmen were able to occupy the crease for long. Worse yet, the boundaries had dried up. Samuels added 35 runs together with Dinesh Ramdin, but it was a partnership dominated by the former, who tonked two big sixes. Ramdin (8) tried to go hard at a delivery from Nawaz, but only ended up hitting Azhar Ali on the chest before the ball bounced into his hands. Nawaz struck again when Kieron Pollard (9) holed out to Sharjeel Khan at deep point. It wasn't long before Jason Holder and Carlos Brathwaite followed Pollard back to the dressing room. Wahab Riaz then stormed in and did what he does best -- deliver a fiery ball that hit Samuel's pads before crashing into the stumps down, taking the batsman down with it for a 59-ball 46. Sunil Narine hit a few lusty blows to finish as West Indies' second-highest run-getter with a 16-ball 23 before it was game over, the side all out for 175 in 38.4 overs. What Pakistan, and Babar, did right earlier in the day was stitching together partnerships. The No. 3 batsman added 82 for the second wicket with Sharjeel Khan (54) and 99 for the fourth wicket with Sarfraz Ahmed (35). Babar hit eight boundaries and three sixes in a commanding knock before Pollard stunned with an acrobatic one-handed catch at the long-on boundary, lobbing the ball inside as he was going over the ropes. Babar's two strong partnerships laid the foundation of the total after Pakistan lost Azhar off the first ball of the match, caught behind off Shannon Gabriel. Sharjeel hit six boundaries and three sixes in an aggressive 43-ball knock before miscuing a drive off Sulieman Benn and was caught at short third man. Shoaib Malik fell to Narine for 6 and from 93 for 2, both Babar and Sarfraz batted sensibly, rotating the strike and hitting boundaries off bad balls. Babar, whose previous best of 83 came against New Zealand in Auckland earlier this year, reached his hundred with a single off Narine. Pakistan was 260 for 6 after 44.3 overs, looking set for a 300+ total, when a floodlight failure halted its momentum. Despite the efforts of Imad Wasim (24) and Nawaz (19), it couldn't get there with the match reduced to 49 overs and Carlos picking up two quick wickets upon resumption of play, but it was a match-winning total nonetheless. SCOREBOARD