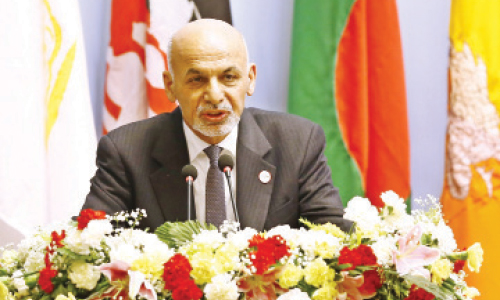 ISLAMABAD/PESHAWAR, Pakistan (Reuters) - Senior Pakistani army and diplomatic officials said on Thursday the leadership of the Afghan Taliban has signaled through the Pakistani military that they are willing to open peace talks, which could be held later in the day. Sources within the Afghan Taliban said their negotiators would hold the first round of peace talks with U.S. officials in Qatar later on Thursday, although no comment was immediately available from U.S. or Qatari officials. Previous efforts to negotiate an end to a war that began in late 2001 have proved fruitless, but the latest signals raised hopes of a much-needed boost for new Afghan President Ashraf Ghani. "The first session will take place today in Qatar and then there would be another session on Friday. Let us see what happens as talks before did not yield any results," a senior member of the Afghan Taliban said by telephone from Qatar. Earlier on Thursday, a senior Pakistani military official said Pakistan's army chief of staff, Raheel Sharif, told Ghani during a visit this week that the Taliban were willing to begin negotiations as early as March. "They have expressed their willingness [to meet] and there will be progress in March. But these things are not so quick and easy," the official, who is close to Pakistan’s powerful army chief, told Reuters on condition of anonymity. "But there are very clear signals ... and we have communicated it to the Afghans. Now many things are with the Afghans and they are serious," the official said. Three senior diplomats in the region confirmed the account based on briefings from people who were at the meeting between Ghani and Sharif on Tuesday. "The venue is still to be decided. Preferably Islamabad, Kabul, Beijing or Dubai," said one diplomat briefed in Kabul. He and other diplomats spoke on condition of anonymity because of the sensitivity of the issue. The Kabul diplomat warned that any talks might hinge on the Taliban's reclusive leader, Mullah Mohammad Omar, who has not been seen since 2001. "The final decision is still upon Mullah Omar, according to (Pakistani army chief) Raheel. The Taliban leadership is consulting him," the diplomat said. Since taking office late last year, Ghani has been seeking support from both Pakistan and China to bring the Taliban to the negotiating table as U.S. and allied troops draw down and the fighting in Afghanistan intensifies. However, even if talks are opened, it is unclear whether the Taliban's leadership is united enough to end the fighting. The militants, who want to re-establish hardline Islamist rule in Afghanistan, have split into different factions since their former regime's leadership went into hiding after the Taliban were toppled by U.S.-backed Afghan forces in 2001.