RAWALPINDI (92 News) – The 222nd Corps Commanders' Conference presided by Chief of Army Staff (COAS) General Qamar Javed Bajwa was held at GHQ on Wednesday. According to a press release issued by the ISPR, geostrategic, regional and national security environment, including India, Afghanistan, Iran, ongoing internal security operations and actions against proscribed organisations were discussed. The COAS also apprised the forum about difficult but extremely essential long-term beneficial measures taken by the government for improving and strengthening national economy. "Pakistan is on a positive trajectory of peace and development and will carry forward the same towards enduring peace and prosperity," the COAS said.

On June 2, Army General Oleg Salyukov, Commander in Chief Russian Ground Forces, called on Chief of Army Staff (COAS) General Qamar Javed Bajwa at GHQ. During the meeting, matters related to enhanced security/training cooperation and measures to further expand joint military ties between the two armies were discussed. The COAS said that cooperation between both countries will not only help in improving peace and stability in the region, but will also usher economic prosperity. “Pakistan does not believe in zero sum games but rather, integration and cooperation.” The visiting dignitary appreciated Pakistan Army’s professionalism and achievements in the war against terrorism. He said that the world should appreciate more what Pakistan has achieved. He also expressed the Russian desire to forge strong and broad based relations with Pakistan. Earlier on arrival at GHQ, Commander-in-Chief Russian Ground Forces laid a floral wreath at Yadgar-e-Shuhada. A contingent of Pakistan Army presented the guard of honour. 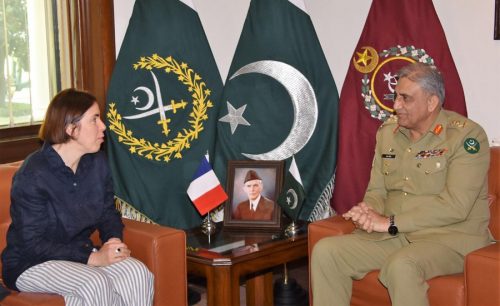 During the meeting, matters of mutual interest, including defence and security cooperation and overall regional security situation were discussed. Both sides highlighted the need to increase military level interactions between the two countries to bolster defence ties. The visiting dignitary appreciated the role of Pakistan Army in battling the scourge of terrorism in the country and for maintenance of peace and stability in the region.

Illegal extension in tenure of NAB chairman will be forcefully opposed: Bilawal Bhutto

Don’t blame Pakistan for the outcome of the war in Afghanistan: PM Imran Khan