ISLAMABAD (92 News) – Prime Minister Shahid Khaqan Abbasi on Thursday said that Pakistan has suffered loss of countless precious lives including martyred former prime minister Benazir Bhutto in war against terror. Addressing the concluding session of the three-day National International Counter Terrorism Forum (IICTF) in Islamabad on Thursday, he said that Pakistan has also suffered an economic and political loss in the war against terror. Pakistan Army, police and the masses have jointly took part in the fight against the menace, he added. The prime minister said that war is not solution in Afghanistan and the conflict can only be resolved through dialogue among Afghans, adding that for the first time Islamabad has started fencing the border to protect our borders and to check terrorism. “There are no terror sanctuaries in Pakistan rather people instigating terror in Pakistan are based in Afghanistan.” Referring to the country's counter terrorism efforts, the Prime Minister said Pakistan is leader in the war against terror. He said we won where rest of the world failed. “Pakistan defeated the same enemy, on the same terrain and with its own resources,” he said and added the world needs to recognize Pakistan's achievements and sacrifices in the war against terrorism. 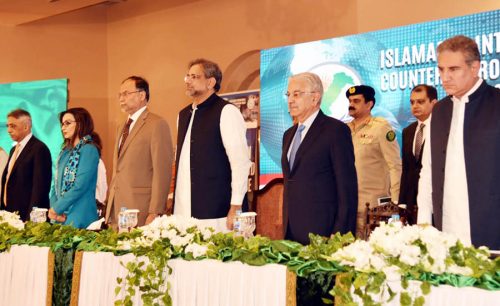 Earlier, addressing the ceremony, Foreign Minister Khawaja Asif said that the terrorists were trying to undermine country’s sovereignty and no country can ignore attacks on its territorial integrity, adding that the whole nation stands united in the fight against terrorism. The minister said that Pakistan's counter terrorism strategy has been most thorough, robust and successful and expressed the confidence that democratic Pakistan would attract private investment to augment its economy. Asif said: “From operations to reconstruction and rehabilitation, the strategy of the Government has been successful in ensuring long term peace in troubled areas and the global community is well aware of our successes in this regard.”