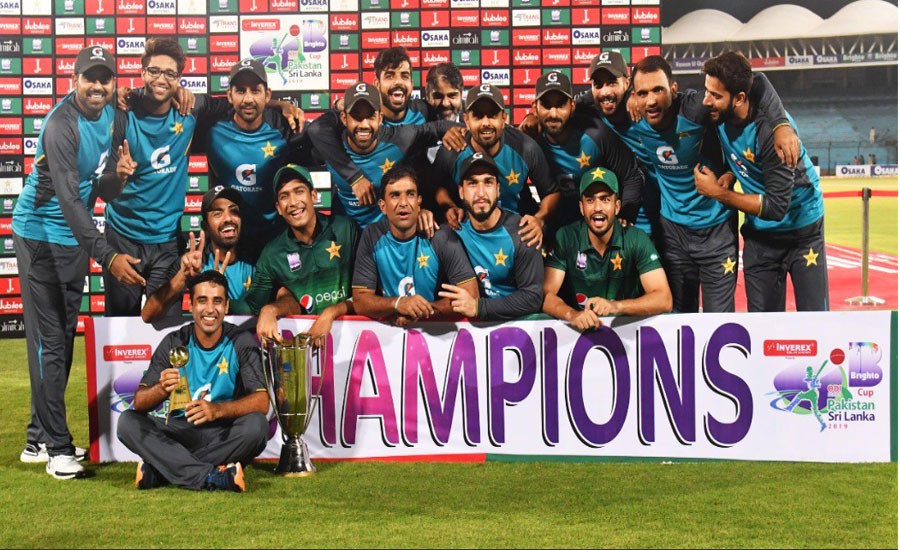 KARACHI (92 News) – Pakistan defeated Sri Lanka by five wickets in the final one-day international (ODI) to seal the series 2-0 at National Stadium, Karachi on Wednesday.  Chasing the target of 298 runs, Abid Ali and Fakhar Zaman paved the way for victory with 123-run partnership. Abid Ali (74), Fakhar Zaman (76), Haris Sohail (56), Babar Azam (31) and Sarfraz Ahmed (23) were top scorers. Pradeep grabbed two wickets, while Kumara, De Silva and Jayasuriya took one wicket each. Earlier batting first after winning the toss, Sri Lanka scored 297 runs for the loss of nine wickets. MD Gunathilaka hit 133 runs off 134 balls laced with 16 fours and one six. Shanaka scored 43 runs with the help of five fours. Thirimanne and Bhanuka were other main scorers with 36 runs each. Muhammad Amir grabbed three wickets. Shinwari, Wahab Riaz, Shadab Khan and Muhammad Nawaz took one wicket each. Abid Ali was declared Man of the Match. Pakistan captain Sarfaraz Ahmed: "Wasn't an easy task chasing this. Credit goes to Abid. The way he handled the pressure. Congratulations to him. Credit goes to all the batsmen which is why we achieved the target. Fielding was not upto the mark. We have to improve that. If we field like that in T20Is, we won't win many matches. Thanks to crowd for supporting both teams. I played here after 10 years. Everyone loves playing at home, so hopefully cricket continues in Pakistan. Sri Lanka will come strong in T20Is, we won't take them lightly."Sri Lanka captain Lahiru Thirimanne: "Proud, because boys fought very hard. Scoring 297 was good, but after that we didn't execute our plans in the first 10-15 overs with the ball. But overall, very proud. Dasun and Shehan batted well the other day. And Gunathilaka's century against this attack, it's very good. It's my first time in Pakistan, been a really good experience. I encourage more teams to come and play." Babar Azam is the Player of the Series. He says, "The hundred two nights ago was my first hundred in Pakistan, so proud of that. My plan is to bat all the overs I can. We've got a good confidence boost from this series, hope to carry it through to the T20Is." Abid Ali is the Player of the Match for his 74, replacing Imam-ul-Haq for this match. He says, "However much I thank Allah, it's not enough. I got a good opportunity today and was happy to do well. I must thank the management and players for backing me. I am thankful to the fans for coming to the ground here in Karachi. Hope to have more international cricket here." Pakistan and Sri Lanka will play the first T20 in Lahore on October 5.